Our June monthly act was fitting all lights in the house with energy-saver fluorescent light globes. There are 23 light bulbs in our house and we had been slowly replacing them. When we replaced the two in our kitchen dining area the drop in our energy usage was stunning! We still have two small halogen lamps which we try to limit use of, a couple of outdoor lights that we didn’t replace, and the laundry light. The first two we bought were 'cool white', which is very bright - suitable for our kitchen, but not so nice for a reading lamp, for example. After that we mostly purchased 'wamr white', which I much prefer. They don't feel 'fluoro' at all. 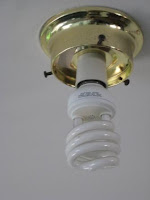 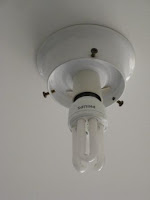 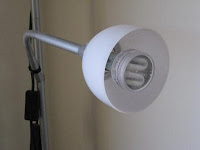 Initial cost: Individual globes can cost around $7 each, but we bought in packs of six, which were around $15-$20.
Initial time: About half an hour to go through replacing globes. 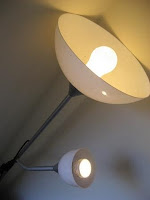 Ongoing time or cost commitment: Zero time; ongoing replacement costs (minimal).
Impact: If every light in the house was on previously it would have been using around 1500 watts. Now it would use around 200 watts. Effectively we have dropped our electricity usage for lighting by about 85%.
Posted by Clare Nerida at 6:21 PM