Do you know what a 'barrier bag' is? 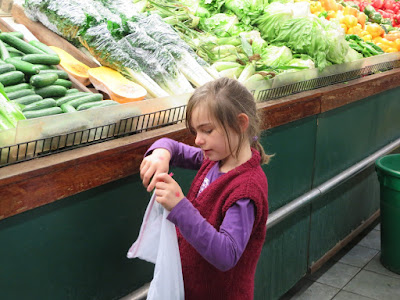 You might not be familiar with the terminology, but chances are you are very familiar with the item: the single-use lightweight plastic bags that are available on rolls when you buy fruit and veg, or whole foods, so your apples and potatoes don't get in a muddle in the trolley.

I have for some years now tried not to use these bags, keeping items loose wherever practical. However, while it might be OK to have a few onions rolling around, soft things like stone fruit or small things like almonds really need something to contain them.

For my birthday last month, my caring and ever-thoughtful mother-in-law made me a set of cloth barrier bags. They are a simple rectangle, in various sizes, with a ribbon draw-string. The fabric is silk voile (lace curtaining) which means the checkout staff can see what is in each bag. 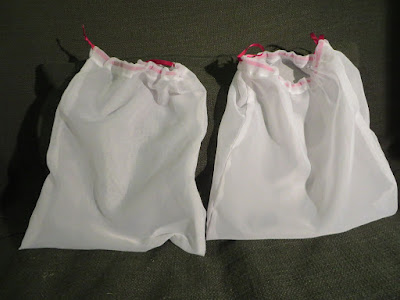 So our May commitment is to remember to use them! We also intend to use paper bags to cover any excess need, to be added to compost when they become unusable. Fruit and veg shops generally provide paper bags for mushrooms, and they can easily be adapted for other uses. The wonderful Kakulus Sister in Fremantle provides them for their dry goods in general, which gave me the idea.

We also use these bags for storing some fruit and veg in the fridge, which so far seems to be working fine. There will be a few things that are very powdery for which we will have to use paper, as I think flour or the like would not quite be contained. 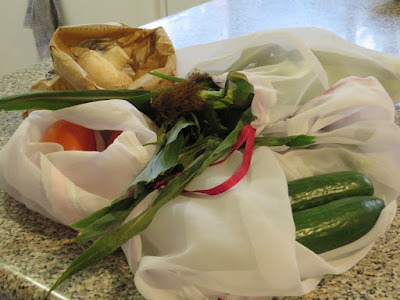 Initial Time: For me, zero. I'm not sure how long it took Tyson's mum to make them. She's very good at sewing, but even if you were less skilled it is a simple project.

Initial Cost: For me, zero. To make yourself: simple ribbons generally cost $3-$5 a metre, although they also seem to turn up on all sorts of things, so if you are not picky about making them match you can probably find some around the house. Or use string. Wool. Old shoelaces. Whatever you can salvage. Fabric prices vary widely, but at say $10/metre your bags would cost about $1 each.

Ongoing time or cost commitment: Remembering to take them and use them. They are stored with our cloth shopping bags, so in theory this is easy, but we are taking a while to get into the groove. Occasionally they need to be washed after use (mostly not). When empty, they need to be returned to their storage place rather than binned. 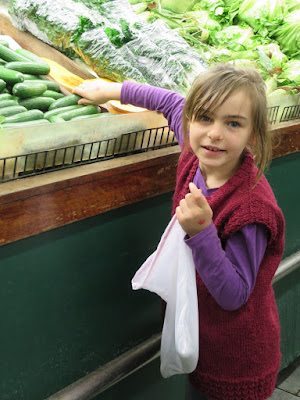 Australians use approximately four billion single-use shopping bags a year. The average useful life of those bags is twelve minutes. Around 86% end up in landfill, where even if they are supposedly compostable they do not really break down, due to the highly compacted nature of landfill. Although most people report using plastic bags two or three times before disposing of them, ultimately they still end up in the bin. The remainder end up as litter, choking up our environment and particularly damaging waterways. Marine life is severely impacted by plastic waste. Once the bags begin to deteriorate, they contribute to 'micro plastics' - microscopic plastic fibres that are being found in sea creatures in increasing quantities. Including sea creatures we eat.

At the other end of the process, producing plastic bags is a polluting process using non-renewable resources. China banned plastic bags in 2008 and it is reported to have saved 1.6 million tonnes of oil the following year.

I estimate that our family uses around 260 barrier bags in a year. There is some environmental cost in producing the cloth bags. Choice has calculated that a green shopping bag needs to be used 23 times before its production footprint is less than the equivalent in plastic. Given that our bags are of polyester fabric, I imagine we need to use them at least 23 times and probably a few more, so we pull ahead after about one year of use.

While researching to write this post I discovered that a government campaign in 2003-2007 to phase out plastic shopping bags, which I had thought was ongoing, ceased in 2008. Plastic bag use leapt 17% the same year. Some States have gone on alone to regulate against single-use plastic, but not Western Australia. After this election I think I will write to whoever forms government to remind them that quite a lot of people would like those bags banned. If China, Rwanda and Bangladesh can do it, surely we can manage here?