I grew up in a house that composted and have always made at least a token effort to get some food scraps into the garden, but somehow in this house we had never really got it beyond a token effort. This month we improved our system of compost and made a commitment to be better at composting whatever we could. We also used the ten days that baby Eva was overdue to get a hearty spring vegie crop into the ground. Our vegie gardening is not nearly successful enough to be considered an act of sustainable living, as any produce is used as surplus rather than replacing shop-bought goods (with the exception of the herb garden), but being in touch with the soil seems to be good for us. I would rather at least attempt vegies in our small patch of yard than maintain something purely ornamental. Except my native violets, the one thing that I have kept alive from house to house for nearly ten years: irredeemably useless, but pretty! 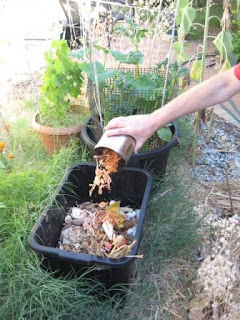 Initial cost: Zero – we used tubs that we already had around the house. To purchase tubs like we are using would be about $30 per tub. A proper compost bin is around $70 and a tumbler (the best option) starts at about $350 new.


Initial time: Half an hour to rearrange garden and get tubs in place.


Ongoing time or cost commitment: About two minutes a day to put the kitchen scraps into the outdoor compost; Five minutes every few weeks to turn the compost.


Impact: Saving about one kitchen bin worth of rubbish per week from going into landfill. Plus all the benefits for the garden of having good compost ready rather than having to keep buying soil enrichers.