I love cheese and eat more of it than my cholesterol count says I should. However, living in Western Australia, almost all our well-known cheese brands are produced in the east - mostly in Victoria. Our most recent sustainable action was to commit to buying only West Australian made cheese. 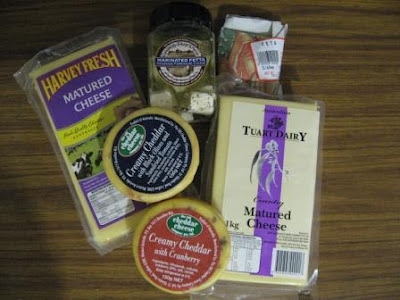 My biggest concern was that WA-made ordinary 1kg blocks would be either completely unavailable, or unaffordable. I am pleased to have so far found two 1kg block lines: Harvey Fresh, and Tuart Dairy. Both were the cheapest brand available the week I bought them on special (around $8.99 I think). Tuart Dairy is a brand from Cape Naturaliste Dairy Company, of Ludlow & Applecross, for which I can't find a website.
Other WA brands that we have purchased are:
Old Cheddar Cheese Company (Ludlow, no website, contact oldcheddar@bordernet.com.au) - for flavoured cheddars/ cheeseboard-style specialties
Mundella (Mundijong) - for feta, ricotta and cottage cheese
Cambray Sheep Cheese (Nannup) - for OH SO GOOD gourmet lines. There is no 'sheepy' taste.
Various southwest lines sold by the Teezy Cheese Stall at Manning Farmers Markets, including Organic from Cowaramup and Gracetown. Teezy Cheese have no website, but are at Manning and Midland Farmers Markets. They are a group of young people based in Morley and do free delivery within a 15km radius. Contact elena@toltrip.com.au or 0422 647 335
I needed to visit a bigger IGA than our local one and read many many cheese labels to find a WA feta, although we also buy gourmet WA feta from the farmers' market. Harder again was finding a WA ricotta or cottage cheese - which is particularly important as the cholesterol issue actually does need some attention and these are lower cholesterol options for cheese. Thankfully, after a bit of searching, I found a few options. 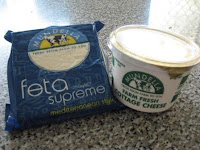 WA cheeses we are yet to try include:
Borello (Oakford, no website, contact borellocheese@bigpond.com.au)
Rose Valley (Wungong, no website, contact 9399 2238)
These are the two WA brands our local continental deli stocks - I had to ask them of course to establish this. We try to support this deli when we can, as it is run by a group of young women who only started operating it about two years ago. Most of their cheese is imported from overseas or the east, though.
Lewana Cottages (Balingup)
Margaret River Organic Creameries (Wagerup) - the only fully certified organic dairy company I have located in my WA cheese search (so far)
Heritage Country Cheese (Balingup)
Harvey Cheese (Harvey) - a smaller independent company, separate to Harvey Fresh. Their cheeses are often branded as HaVe. They also run regular cheese-making workshops open to all.
Denmark Farmhouse (Denmark)
Casa Dairy (Canningvale) - another possible source of Ricotta and Feta
Cheese brands now off the menu as they are not from WA include: Bulla (Vic), Bega (NSW & Vic), Kraft (Vic), Fonterra (inc. Bega, Brownes, Mainland, Nestle - various Vic/NSW/Tas) Murray-Goulburn Coop (inc. Liddels, Cobram, Devondale - Vic), Lemnos (Vic), National Foods -  now part of Lion (inc Australian Gold, Cracker Barrel, King Island, Masters, Mersey Valley, Mil Lel, Tasmanian Heritage - various Vic/NSW/Tas), Warrnambool Cheese & Butter Factory (inc Sungold - Vic). Many home brand or store brand (eg Coles, Woolworths) cheese lines are reportedly imported from overseas. Watsonia, formerly a West Australian brand, moved production to Victoria at the end of 2010.
Its a tricky area, because in researching info for this blog I came across a Federal Court ruling against Harvey Fresh in 2009, initiated by the ACCC, for making Harvey Fresh block cheese look local when in fact it was being made in Victoria. They have increased their WA production since then, and their packaging still looks like its a WA brand, so I have emailed to ask them whether they have changed their practice since this ruling to produce their block cheeses in WA. So far they have not responded to my enquiry, so it will be Tuart Dairy for us until I can clarify the issue.
If I haven't mentioned the brand you like try this website for a list of Australian dairy companies and their products. If its imported from overseas the label should identify this. For smaller brands, try this site, which includes only five of the WA cheese companies - so clearly is not comprehensive in its coverage. For a list of WA food companies for a range of food products try the Buy West Eat Best website - although, again, not comprehensive especially for smaller traders.
Buying WA is not quite buying 'local', but I'm not ready (yet?) to limit my cheese to the few near the metro area - Mundella, Rose Valley, Casa and Borello. In other parts of the world Denmark (400km away - a south coast town, not the country in Europe) may not be considered 'local' but here in Perth food has either crossed the arid lands to the north (coming from Carnarvon or Ord River, generally) or the east (connecting the rest of Australia), or it hasn't. If it hasn't, its from the southwest of our State, reaching up to about 450km from Perth. If its not from the southwest, there is no mid-distance (except Carnarvon fruit & veg, which comes around 900km). From the east or the Ord River food has come over 2000km at least, probably more likely over 3000km - yes, Ord River is in WA, but it is around 3200km from Perth!
Initial Time: Reading cheese labels in stores took probably half an hour; talking to my local deli staff about ten minutes; searching the web for WA cheese producers and to check where bigger brands are produced (as their packaging lists their head office, not necessarily where the cheese came from) about two hours. But now that I have done that you don't need to! So (if you live in southwest WA) your initial time commitment could be much smaller.
Initial Cost: zero
Ongoing time or cost commitment: Generally I have found comparable priced WA options for most cheese I buy. Obviously gourmet Cambrey Sheep Cheese costs more than bulk-line supermarket items, but that would apply whether I bought Victorian gourmet cheeses (such as the extremely fine Timboon or Jindi cheese we have purchased in the past) or gourmet WA cheese. Mundella feta is a regular supermarket line that is competitively priced with other feta brands such as Lemnos, and its Ricotta and Cottage Cheese is on par with brands such as Bulla. The biggest test is whether I can avoid the weeks that Watsonia or Devondale 1kg block cheese is selling for $8 and hold out until Tuart Dairy is on special. Then I stock up! I'm also a sucker for marked-down specialty cheeses, and have had to steel myself several times not to purchase a Chrystal Fresh cheese platter. Also, some of the WA lines are not stocked at our small local IGA, so unless I can convince them to order these lines (which I will try to do - smaller stores are more likely to respond to such customer requests) buying WA will mean occasional trips across to a bigger IGA and, for Mundella Ricotta, to Woolworths (shudder).
The buy-WA commitment does mean that one or two favourite imported gourmet lines are off the menu, such as Jindi blue or Dutch Leden. Gracetown Blue (from Teezy Cheese Stall) is a fine alternative blue; I haven't yet found a local line that has caraway seed in it like Dutch Leden. Also, the cheap-end camemberts and bries (eg Australian Gold) are not made in WA, so buying WA means having to go the gourmet approach for soft cheeses. That hasn't hit home yet because I am not supposed to be eating soft cheeses while pregnant!

After beginning to write this blog I realised that we also eat cheap grated parmesan - I had somehow forgotten this was also cheese when I was making our WA commitment. So far I have only managed to find a WA-made romano, and a relatively expensive one at that (from Teezy Cheese), to replace cheap parmesan, which is definitely not from WA, although the packaging is vague about where it is actually produced. This may require a slight change in eating habits as we can't afford to eat expensive parmesan/ romano at the rate we consume the cheap stuff!
Impact: A 2007 report assessing food miles for a regular shopping basket in Melbourne estimated cheese there generated about 152g carbon dioxide per kilo. Given that most Australian cheese is produced in Victoria, and this report estimated cheese travelled about 688km before reaching the consumer, I would estimate most Australian cheese not produced in WA travels about 4000km on its way to my local supermarket shelf. Using the same figures as the 2007 report, this means 1kg of eastern states cheese generates around 882g of carbon dioxide. However, these figures do not take into account that the trucks are refrigerated, so the actual amount would be higher. I think its fair to say cheese roughly generates its weight in carbon dioxide when transported to WA from Victoria.
If I estimate WA cheese to have travelled between 100 and 500km to reach me, the equivalent carbon dioxide generation is between 22 and 110g per kilo of cheese. At a guess we eat about 2kg of cheese a month (including feta, gourmet items, block cheese, ricotta...). If all bought from the east that would be 24kg of carbon dioxide generated per year. If all bought from WA that would be between 0.5 and 2.6kg of carbon dioxide per year.
There are also the positive benefits of supporting local industry, and supporting smaller businesses.
It must be acknowledged, however, that no matter where it takes place the production and distribution of dairy products is energy intensive. Many sources estimate that producing 1kg of cheese generates around 10kg of greenhouse gas (not just carbon dioxide, also the more greenhouse-potent methane, a large portion of which cows are unhappily responsible for). So our household's 2kg per month of cheese may be causing 241 instead of 264kg of greenhouse gas per year if purchased locally. Some thoughts on ways to reduce the overall footprint of food consumed are here. Once the calcium requirements of pregnancy and breastfeeding are behind me, we will need to seriously consider reducing our cheese consumption overall. For now, buying only WA cheese is the small step I have been able to commit to.
Posted by Clare Nerida at 9:21 AM 20 comments: Links to this post