The world of school has brought us into the world of children's birthday parties. 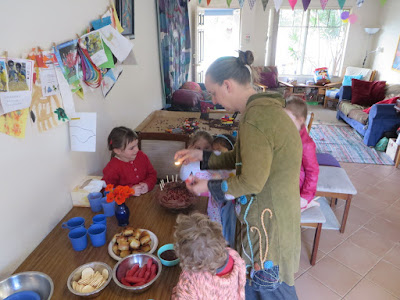 How do we encourage our daughter to celebrate her friends without having to buy more and more stuff? How do we allow her to have her own birthday celebration without expecting mounds of loot as the main event?

Two years ago I wrote about celebrating birthdays when our children turned one and four. At the time, Eva's friends were still from families that we knew, who understand a little of our values around consumption and waste. Now she has many friends whose families we know only to wave to at school pick-up, and I feared we were opening ourselves to a pink plastic mountain of gifts. 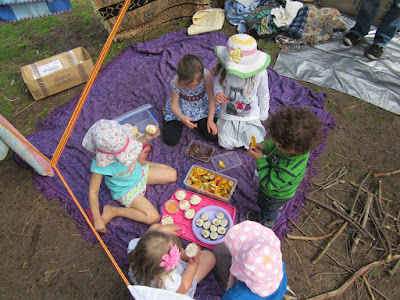 Last year our birthday invitations asked people not to bring gifts, explaining that we were trying to help our children learn to value time with friends without receiving any material items. We took blankets, boxes, ropes, pegs, cushions etc to a local park and had a cubby-making afternoon and picnic. 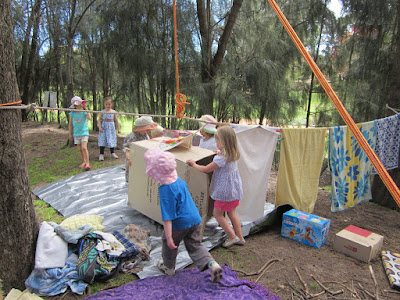 (Of course if talking about Eva's 5th birthday we have to make mention of Grandad's amazing excavator birthday cake. Retired engineers...)

Saying 'no gifts' made last year's guests a bit uncomfortable, although they respected the request. One mum asked me a bit nervously if it was OK if her daughter made a card to give, which told me I'd come across a bit too hard-line about the gifts thing.

So this year we opted instead to say:
We are trying to reduce our Global footprint and to help our children to ‘consume’ less, and encourage you to consider recycled, home-made or second-hand gifts, or no gift at all.
I was quite unsure about putting this on the invitations, as I did not know most of the families receiving them. However, the response was very positive. One parent thanked me for getting her thinking, and for freeing her up from needing to go and buy something. Another, who had responded by baking biscuits with her daughter as a home-made gift, thanked me for giving her a lovely activity to share with her daughter. Two families had put their heads together and coordinated gifts, so that one gave Eva some pre-loved jewellery and the other a second-hand jewellery box to keep it in. 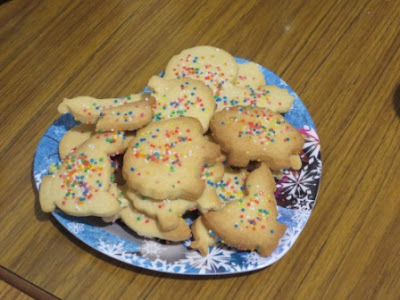 The unexpected side effect was that there was hardly any packaging. Second hand items have already shed their useless plastic coatings! Although we had said nothing about gift wrapping, nearly everyone either presented gifts in a reusable bag, or with home-made paper. I can only assume they caught the 'vibe' and applied it to their choices for wrapping also. We continue to wrap our own gifts at home in fabric and ribbons, which we use over and over, or use hand-decorated paper (usually recycled, with random old printouts on the inside). 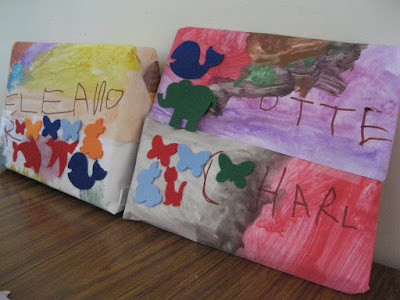 The actual events were mostly free play, without organised party games (which almost always involve buying prizes to distribute). Kids took home a slice of cake but no party bags. We had encouraged Eva to invite a small enough group of school friends so that she could actually enjoy her guests, and this went very well. There was much leaping on the trampoline. We split celebrations up into a number of smaller gatherings, for friends from different parts of our lives, rather than one big gathering. My experience is that bigger gatherings tend towards emphasising consumption rather than quality time, although I'm sure there are exceptions to that. As noted when I wrote about birthdays previously, we avoided single-use items like themed napkins, single-use decorations or disposable plates.

When Eva has been invited to other birthday parties I have gone with the social obligation of sending a gift. I try to ensure I don't give any gifts I wouldn't want to receive, applying my own values to gift selection, such as: encouraging open-ended play; reducing consumption; avoiding plastics; reducing packaging. Several times this has been a kids recipe book. Another time we sent a pre-loved game (in good condition). Eva packaged up her dressing gown as birthday gift for her best friend, because she knew he really liked it.

Initial Time: Zero time in requesting low-impact gifts; a little time each birthday to think through gifts and other aspects.

However, saving money is not the main intent and aiming to save money on kids birthdays can lead to less sustainable choices: For example, setting a $5 or $10 gift limit (for yourself, or for others coming to your party) is likely to increase the amount of cheap plastic you give (or receive). And it is hard to see how good quality gifts costing $5 could have been produced in ways that ensure everyone in the supply chain received appropriate pay and conditions for their part in the gift getting to us. For this reason I argued for our kindy 'gift from Santa' to the kids last year to not set a cost limit, but rather to ensure the kids were all given books. Its also a reason we didn't do 'party bags' for kids to take home - because they end up full of cheap trinkets that go almost straight into the bin (or just mounds of sugar).

Impact: The greatest impact was probably the conversations we started. We also continue to hope that we are modelling for our children and their friends less consumption-oriented ways to live.

I can't find any data on how much waste is generated by birthday parties, or how many birthday presents get thrown in the bin. Australians generate around 44 million tonnes of rubbish each year (almost certainly much more, as these statistics are nine years old, and the amount had doubled in the ten years before that). Even at the 2006 figures, that is about 2 million tonnes of rubbish for each of us. Every single Australian. A little under one third of the total waste is household rubbish - such as birthday party debris and broken plastic toys.

Links: If you found this helpful, you may also be interested in my past posts about Christmas: practical ideas; changing the questions; giving things away; Baking Day.

Some other people sharing ideas for sustainable kids birthday parties: one two three

A bit of a rant about how obscene the children's birthday party circuit can be.

If you are a Melbourne person, here's a firm that do zero-waste kids' birthday parties with Trash Puppet Making Workshops.

An idea for gifts: online donation organisation that sends half the money to a chosen charity and the other half to your child, for them to buy one meaningful gift. (Another blog I read described a Canadian tradition of having two donation jars at a party instead of gifts - a gold coin in one, going to a charity; a gold coin in the other, going to the child)
Posted by Clare Nerida at 10:50 PM 1 comment: Links to this post

Last month Tyson and I organised the catering for a one-day retreat. 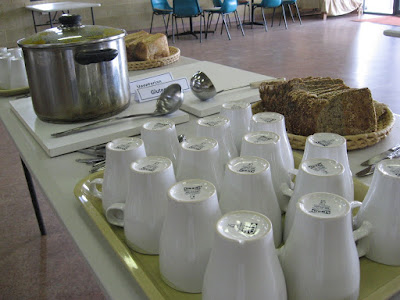 Back in May I wrote about taking cutlery and crockery from home to attend a conference, to avoid using the disposables provided. In fairness to the organisers of that conference, I should have noted that they were all volunteers (some of whom read this blog) and that they had made the effort to provide compostable disposables, which cost quite a bit more.

So when it was our turn to cater, we thought we had better listen to my own critique and aim for sustainable catering. Primarily, this meant not using disposable cups, plates or cutlery. We were ready to wash dishes ourselves, but set the kitchen up so others could easily wash or dry. We found that the friendly retreat participants were mostly happy to pop into the kitchen and do it themselves. 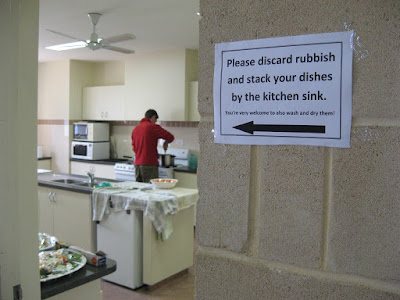 The central kitchen sink had its own hot water system. We opted not to turn it on and have it run all day, but rather to use water from the urn (a wall unit that was permanently on anyway) to top up the sinks. We provided Fair-Trade tea and coffee. We also offered a compost bin, to reduce the amount of food waste going into landfill and use it instead for our garden. 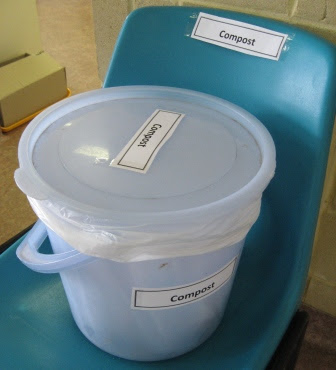 Initial Time: The set-up time was no greater. A little extra time for thinking around how to do it, perhaps.
Initial Cost: Zero. The cost of a few teaspoons of washing up liquid and laundry powder is negligible. There was a cost saving in not purchasing single-use items.
Ongoing time or cost commitment:
Actually washing dishes was a small part of our day, shared between the three of us running the kitchen and many of the retreat participants. The chatter around the kitchen sink was a lovely community-building space. 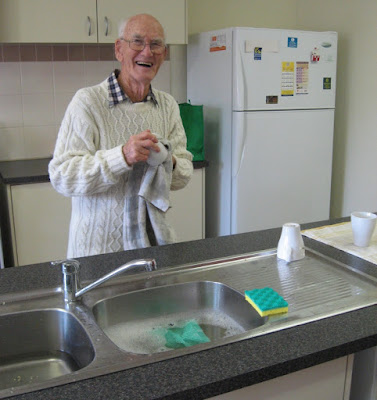 There were small follow-up tasks, like carting the compost home to put into our compost tumbler and putting the tea-towels through the wash, but these were very minor within the overall tasks of organising the food.
Impact: As discussed in May, Australians use about 2.7 million disposable cups a day, and probably nearly as many plates and pieces of cutlery. In China it is disposable chopsticks that are a problem - causing deforestation to keep up with demand for tens of millions of chopsticks each year.

Catering for thirty people, we saved from both production and disposal around thirty dinner plates, thirty dessert plates, thirty bowls, sixty coffee cups, fifteen water cups, sixty spoons, thirty forks, and ten or so knives. That's a small dent in the millions used each day, but a dent none the less.

And as often happens when we take an action in a public space like this, even quietly, it generated quite a few conversations and hopefully set people thinking at least a little about their consumption and disposal.
Posted by Clare Nerida at 9:12 PM No comments: Links to this post