Winter has again seen us working at staying warm without turning on heaters. 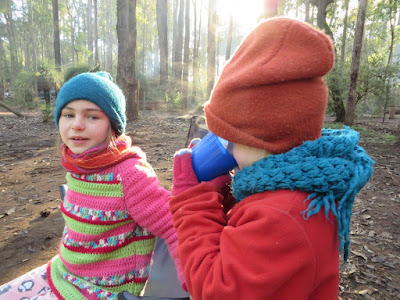 Our winter floor covering had been getting increasingly threadbare. Last year we insulated it with a layer of padding underneath, cut from the base of a single bed that was on its way out (having been with me for about 30 years). This layer did help, but it covered only part of the area, and didn't address the holes developing in the old rug. When friends offered us a replacement rug that they were disposing of we jumped at the chance to upgrade. 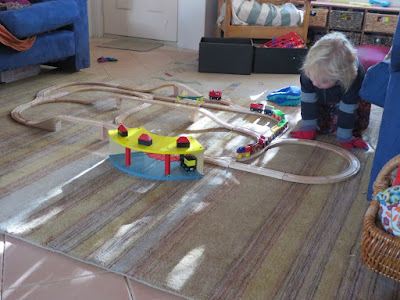 With a nice thick layer to catch morning sun warmth and insulate us from the cold of the tile floor, we have been enjoying playing on the lounge floor with no additional heating. 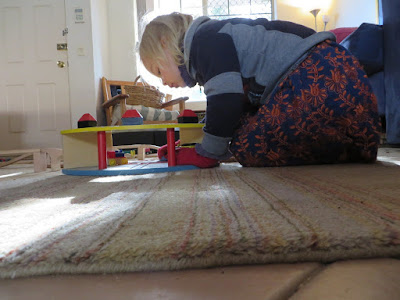 We also added carpet offcuts under both the lego table (the central item in our living space) and the dining area, which have added to the winter floor insulation. The thick white one under the lego table also cries out for cubbies to be made under there - a call to which the children readily respond. 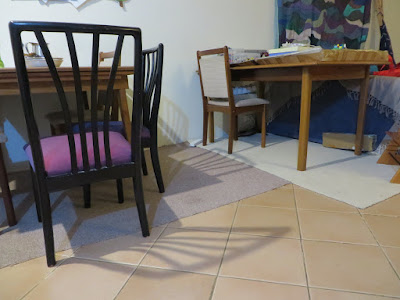 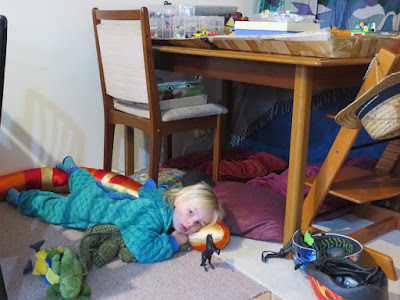 A few years back we had a go at carpet offcuts under the dining table. After one season they got shabby and didn't return the next year. It is a challenge storing them through summer. Hopefully we can manage it this year, but if not it is possible we could just get a fresh round of carpet pieces each autumn, as they are destined for waste anyway. 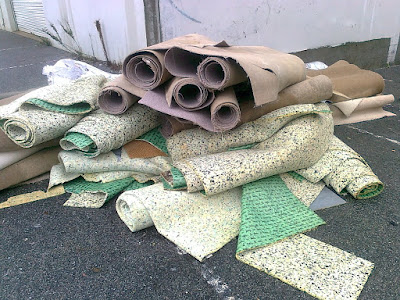 Initial Cost: zero - carpet offcuts are free behind the carpet store; the lounge rug was a second-hand gift.

Ongoing time or cost commitment: ten minutes when the weather warms to take up and store floor coverings. If satisfactory storage for the carpet offcuts can't be found, there will be time next year making a trip to pick up some more from the carpet store - no more than half an hour, as it is not a long way to go.

Impact: Our most recent electricity bill, for May and June, showed we had used an average of 6.2 units (kWh) of energy per day, down from 6.6 units per day for the same period last year and 8 units per day the year before (but the previous three years we were in the 5.8 to 6.1 range, so it has not been all improvement!). By comparison, the average household use in our neighbourhood is 11.9 units a day, and 'similar houses' record an average of 13.1 units.

We have turned on the heating (reverse cycle airconditioner) I think twice so far this winter, each time for about an hour to take the chill off. Carpets are just one of the range of measures we take to warm ourselves without using electricity (see also May and August 2014 posts)

Posted by Clare Nerida at 10:50 PM No comments:

When Tyson turned forty in June we wanted to celebrate him well, without massively increasing our footprint. 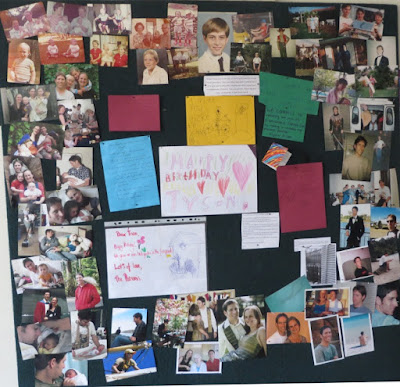 The main agenda was to gather people together and enjoy each other, with good food. But here are a few things that also had an eye to our sustainability commitments: 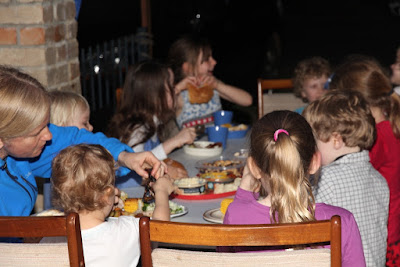 We asked for gifts of sustainability actions in lieu of presents, and were touched by how many friends offered Tyson some idea of what they are doing to live within our earth's means. Some made new commitments; others reiterated choices already made. I was particularly moved by one (slightly) older friend who gifted to Tyson her decision to make more use of public transport, along with an invitation to ask her how it was going and an admission that the idea of using public transport scared her a bit. The traditional photo board included space for people to add notes about their sustainable choices. 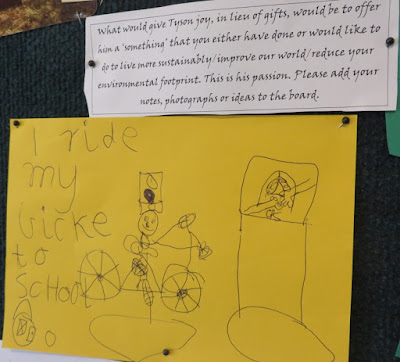 Cooking one big roast dinner for sixty people used less energy than all those households cooking their own roast dinners at home (and was more fun!). We used about 15kWh of energy for cooking; a household roast dinner takes around 2kWh. The meat was free-range pork. 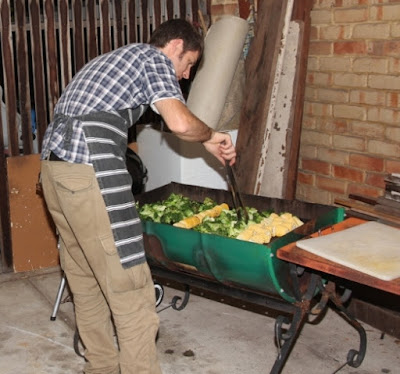 We borrowed cutlery and crockery from Tyson's parents to reduce our use of disposable items. We still have a pile of disposable plates, cups and cutlery in the cupboard from before we really got moving on this sustainability journey, some of which have been reused and returned to the cupboard several times, and these bumped up the numbers, along with some compostable plates. (I have my doubts about how they compost, though - I tore them into quarters and soaked them in water for a week and they were showing no signs of breaking down or being suitable for our compost any time soon!) Despite me encouraging guests to leave the dishes for us to run through the dishwasher in big loads the next day, a happy team got going in the kitchen and cleaned them all for us. They really did seem to be having a great time in there. Perhaps for some this was their sustainability 'gift', but most I think just enjoyed talking and laughing while working together. 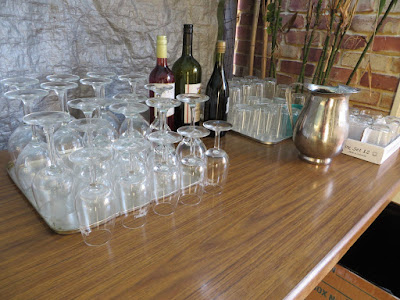 We minimised our use of gladwrap and alfoil. So often at parties or events these are used to cover food for quite short periods of time. Instead, we used baking trays to cover salads. 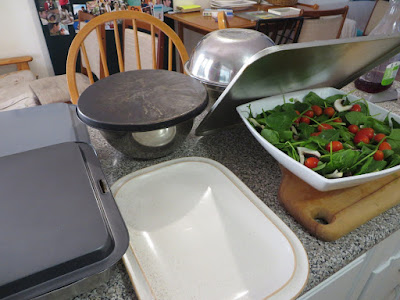 We labelled our bins and encouraged people to separate out compost, recycling and genuine rubbish. 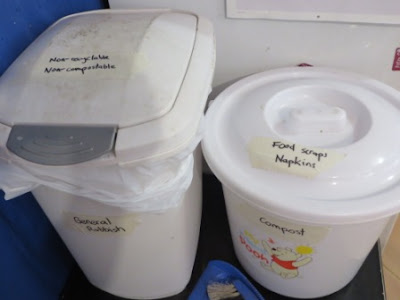 Eva made her own decorations. We also re-used the cloth bunting made for us by a friend last year, and ran one string of LED fairy lights. 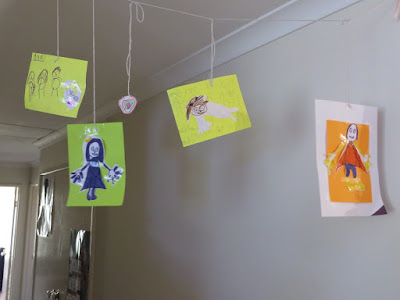 Cards were home-made. The two gifts we did purchase were wrapped in cloth, one from each of the children. (We are not scrooges; its important our kids experience both giving and receiving. We encouraged them to be involved in choosing gifts that suited Tyson, to help them learn to think of someone other than themselves) The cordless drill set in particular will be put to use to facilitate many future projects along our sustainability journey. 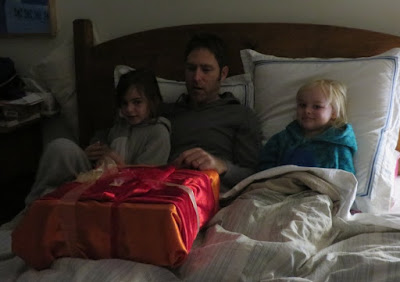 Two weeks later my dad turned eighty, on the opposite side of the country. We celebrated by all my siblings (five of us) gathering, along with spouses and children, to share a holiday in the Grampians with my parents. The emphasis, again, was good time together. Bushwalking. Eating. Talking. Cuppas. A visit to the farm where Dad grew up. Grandkids' shenanigans. Reading books. Spotting wildlife. My gift was to arrange for my sisters and I to sing a couple of songs for Dad. 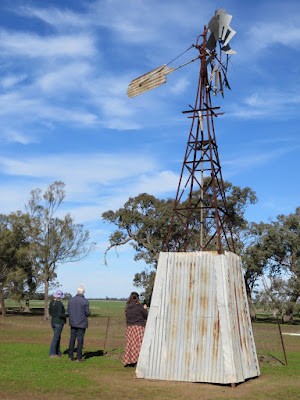 However, as we don't live near each other (not even all in the same country) a very great amount of fuel was used to bring us together. Would we have had less environmental impact if we had all sent my dad expensive presents instead? Maybe. But we would not have celebrated him well, and we would not have modeled for our children that people are always, always more important than stuff. 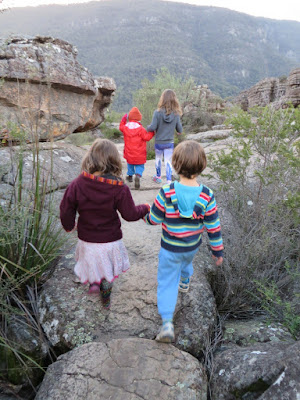 Happy birthday to two of the finest men in my life.

Some of the sustainability actions Tyson was gifted: 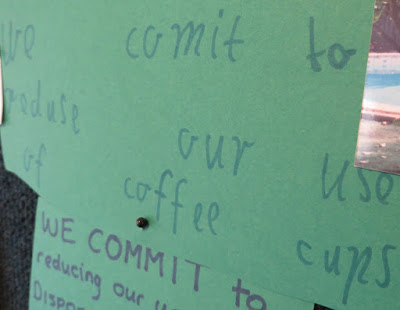 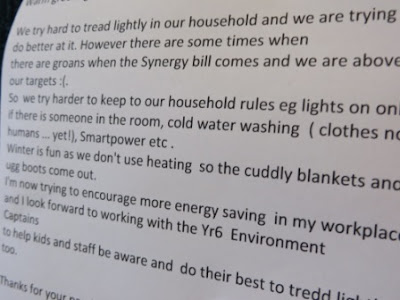 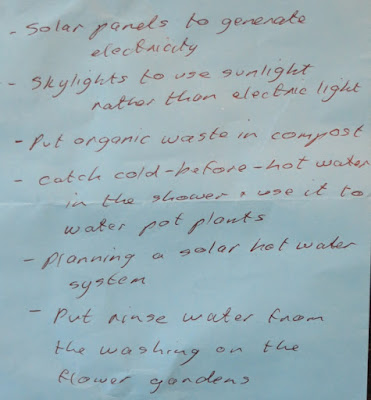 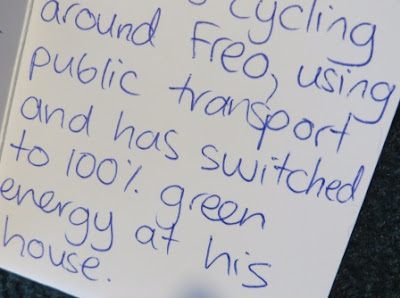 And finally from our small man, a gift not of sustainable actions but of hope: 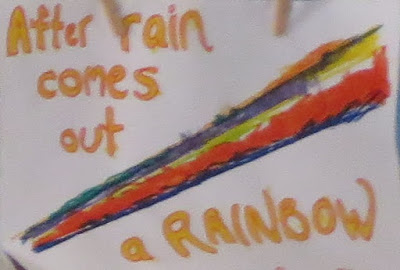