In our neighbourhood demolition of old homes and construction of new is a part of the streetscape. 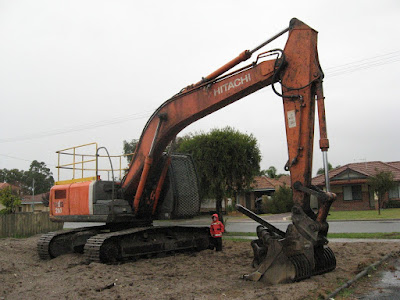 Both our children can pick the sound of an excavator munching into a house from blocks away. Skip bins seem to decorate every street. 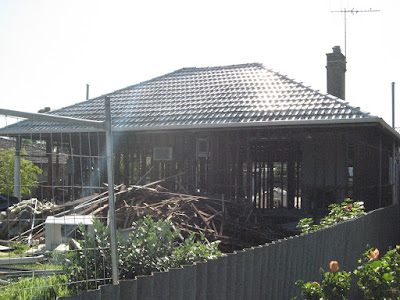 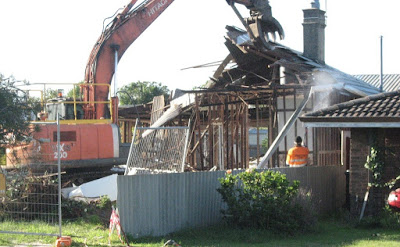 We are neither demolishing nor building, but we try to do our small bit to put at least some construction waste to better use. 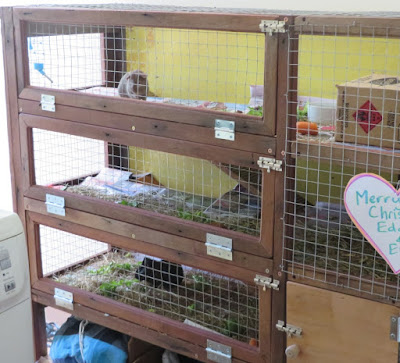 One recent project was the guinea pig cage - aka The Piggie Palace. 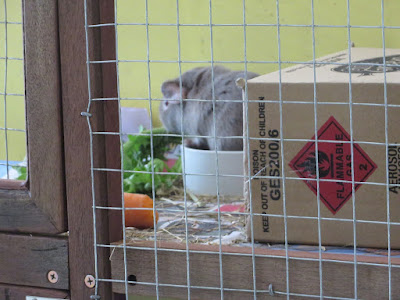 The Piggie Palace is made largely from old floorboards, salvaged (by a friend) from a house under demolition. 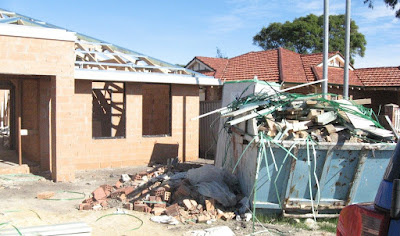 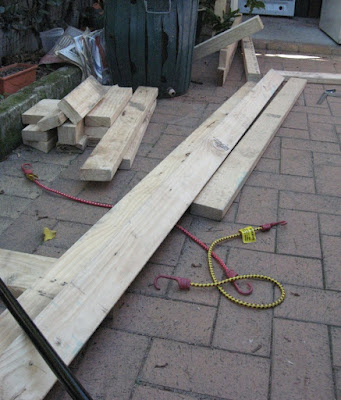 Timber from the bin in front of the construction site two doors up has partly been stockpiled, and partly used to construct shelves and bench in Tyson's teeny shed. 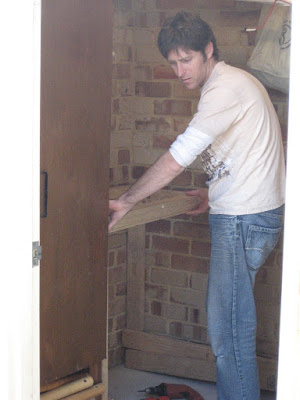 Meanwhile I used bricks salavaged from the same site to make a new sandpit. 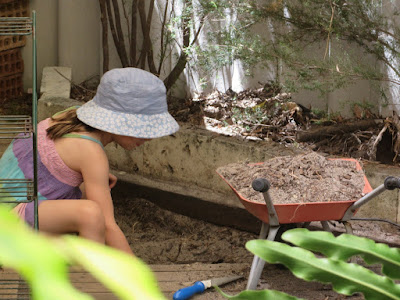 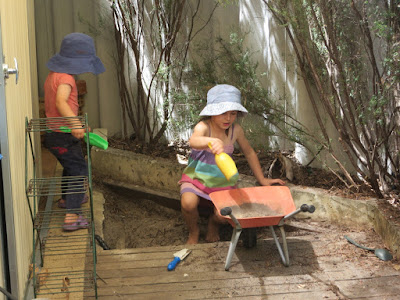 After setting my team to work emptying out the patch of garden that had become known as 'the digging hole', I gave it brick walls. 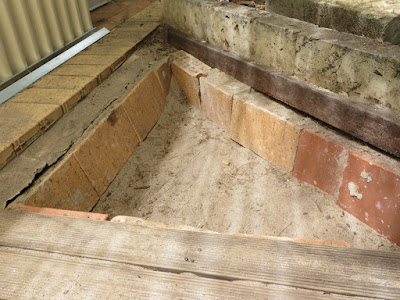 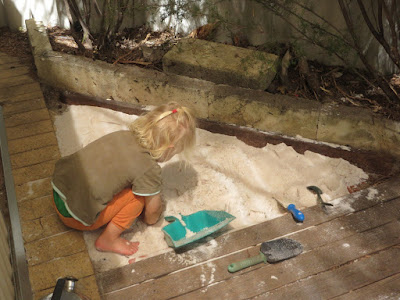 Initial Time: Collecting and storing waste materials took varying amounts of time, from about twenty minutes to collect and stack some bricks to a half day expedition to retrieve and store salvaged floorboards and other timber from the shed of a friend who was moving into a smaller place. Using salvaged materials added a little time to the Piggie Palace, as floorboards had to be ripped to the right width, but generally 'waste' takes no more time to use than new stuff.
Initial Cost: zero for waste materials; most projects have required some additional purchases (eg. sand for the sandpit, fastenings for the Piggie Palace) 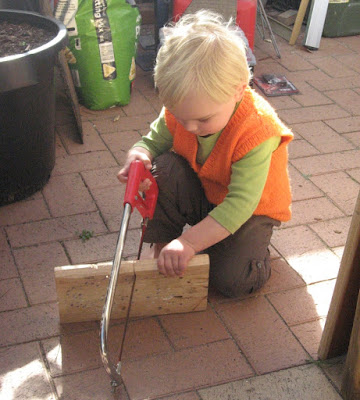 Ongoing time or cost commitment: For these projects, zero. The ongoing commitment is to use materials we have salvaged and stored (mostly timber). Some of this timber (that which is not treated) will be burnt in our fire drum through the cooler months. 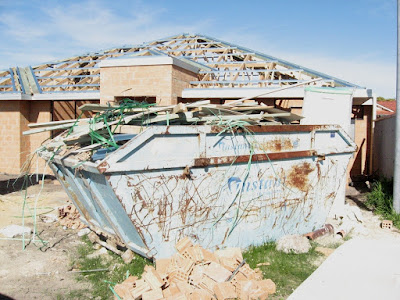 Impact: According to the Australian Bureau of Statistics, over 40% of the waste generated in Australia is construction and demolition waste. Most of it (over 80%) is concrete and bricks. Fortunately, there are efforts to recycle construction and demolition waste. In 2003 (the most recent statistics), 57% of this waste was recycled, compared with only 46% of total waste, meaning that 'only' 34% of landfill across the country was comprised of construction and demolition waste. Here in Perth, however, things are much worse, with only 21% of this form of waste recycled, making it 57% of our landfill (approximately 1.5 million of an annual 2.7 million tonnes of landfill). And even the national figures are not great when you consider that around 75% of this waste is 'clean excavated material, concrete, bricks and timber'. In New South Wales, this 75% is largely saved from landfill. The rest of us need to lift our game. (And perhaps we are. These are quite old figures. Something from 2012 apparently says WA has upped its recycling in this sector to 30-40%).

Bricks and concrete are supposedly easy and cost-effective to recycle, by grinding down for aggregate, which is used in things like low-grade roads and non-structural sub-bases. Timber is a little more difficult, as it requires manual labour to salvage good pieces, and for economic reasons most demolitions are heavily mechanised operations.

We did make sure to ask before skiving off home with a barrow of construction materials, as these could be a valuable resource, but in each case they were destined for landfill and no-one minded our salvage operations. The bits and pieces we have reused are a miniscule portion of what is being disposed of. But perhaps if more people started eying construction or demolition site skip bins as resources rather than waste gathering receptacles we could chip into the mountains of waste we are building up for our children. 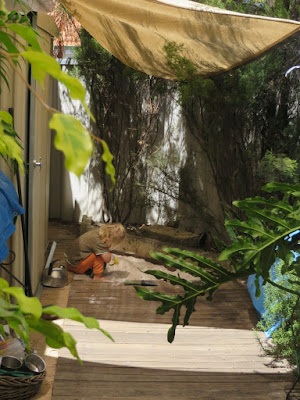 Four-minute video of construction waste recycling plant in Perth. You can also book a tour of the plant. (Thanks for the link M, for some reason your comment doesn't seem to be showing up)

House in Brighton UK made entirely out of waste materials.

An episode of 'Josh's House' that particularly looks at construction and demolition waste, including a visit to a recycling plant for this material. (The program in general is all about Josh Byrne building two sustainable homes here in Perth in 2012-2013)

ABS article on waste in Australia, recycling trends, causes and impacts, and lots of statistics (of course, because its the ABS)

Australian government publication with lots of information and case studies on recycling and reuse of construction and demolition waste 'across the supply chain'.

WA Waste Authority: oh so many information documents about construction and demolition waste.

Sustainabilty Victoria: 'How to minimise construction and demolition waste' with linked info articles

Environmental Protection Authority NSW: 'Disposing of household building waste' with documents for the beautifully named process of 'house deconstruction'.
Posted by Clare Nerida at 10:53 PM 6 comments: Links to this post