A visit to the super composter

This 'sustainability action' was one to educate ourselves. 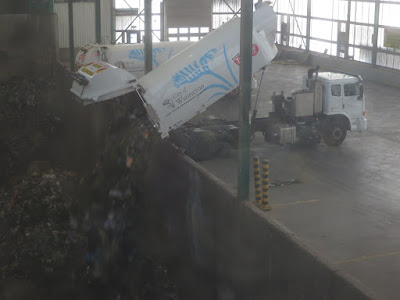 We were given the opportunity to join a group from Uniting Church in the City for a tour of the Neerabup 'Resource Recovery Centre', which is operated by Mindarie Regional Council. Basically, it is a huge composting plant, taking the waste from general (green lid) rubbish bins and processing it to extract organic matter and make it into usable compost. 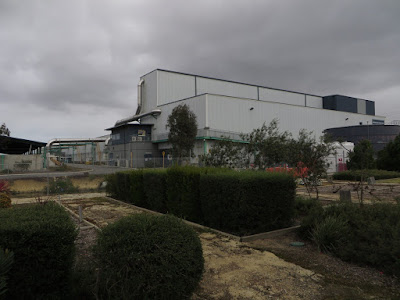 If this doesn't sound like fun to you, ask any pre-school child how they would like to see where the bin trucks go with our rubbish. 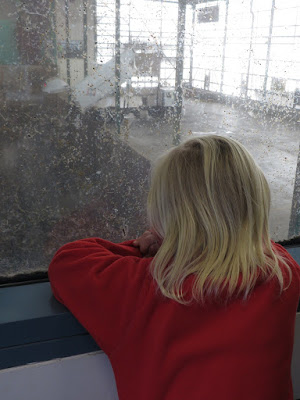 Our small boy was beside himself with excitement; our big girl was jealous because she had to go to school instead. The word 'grapple' entered our basic vocabulary and play. 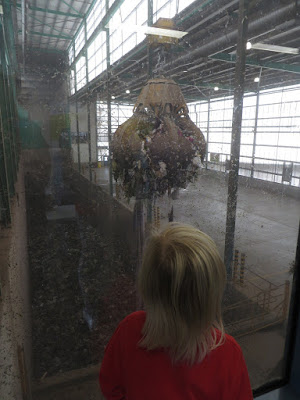 The Mindarie Regional Council serves the local government areas of Wanneroo, Stirling, Perth, Joondalup, Cambridge, Vincent and Victoria Park. However, the bulk of the waste taken to the composting facility comes from Joondalup, Vincent, Wanneroo and Victoria Park. The facility processes 100,000 tonnes of waste a year; the seven councils that make up the MRC together put about 160,000 tonnes of waste into our general rubbish bins, so quite a lot still goes straight to landfill. About 30-40% of the tonnage received at the facility comes out as compost; the non-organic remainder also ends up in landfill. So, there is still lots of behaviour-change work to be done, but 30-40,000 tonnes of compost each year diverted from landfill is a great thing.

Here's the page that explains how the 'Resource Recovery Facility' actually works to extract compost from general rubbish. Or here for the commercial version.


Initial Time: Half a day


Tours are offered free, but you need to book. Here's the website with details for various tour options (I have heard there is more rubbish truck action at Tamala Park landfill, if entertaining children is part of your brief). Our tour was run by the inimitable Peg Davies, who I think does a great many of them. She really knows her stuff.

Ongoing time or cost commitment: Continued sorting of rubbish into regular or recycling bins, with greater attention to keeping glass and ceramics out of the regular bin.

Impact: I learnt a lot. I also found it really encouraging to see the efforts being made to keep organic matter out of landfill. It helps me to keep doing our little things when I see organisational attempts at bigger things like this.

The biggest learning was the call to keep glass and ceramics out of general rubbish. Put them in the recycling, broken or not. Glass in the compost is a major problem, because it is nearly impossible to completely sieve it out. I had not taken the notices about keeping glass out of general waste very seriously, because I couldn't conceptualise how general waste could be turned into compost anyway. Now that I have seen it in action I get it: If you live in Wanneroo, Stirling, Perth, Joondalup, Cambridge, Vincent and Victoria Park DON'T PUT GLASS IN YOUR GREEN-LID BIN. Thanks.

If you are in the East Metro Regional Council - Bassendean, Bayswater, Belmont, Kalamunda, Mundaring and Swan - planning for a similar facility at Redhill is underway, aiming to be operational by 2019. So when the 'no glass' notice comes around, take it seriously!

If you are in another area - how about writing to you local council to let them know that you think these places are a good idea?