With baby due in August, we chose to purchase cloth nappies rather than go disposable. We chose Baby Beehinds Bamboo Fitted Nappies and are happy with them. We have also set up a system of re-usable wipes – squares of old-style cloth nappy in water with a tiny bit of antibacterial soap, with the water changed every day. 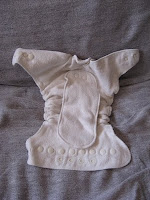 Initial cost: Around $600 for 24 nappies and 6 nappy covers. We will eventually need some bigger covers but the nappies themselves adjust to be big enough to take a child right through the nappy years. Zero cost for the wipes, as a friend gave them to us (thanks Erica). 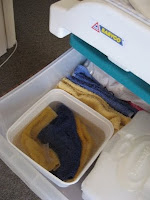 Initial time: Zero for nappies. About 10 minutes to set up a workable system for storing wet cloth wipes.


Ongoing time or cost commitment: Washing costs of water, electricity and washing powder, and the time required to do one load of washing per day. However, as nappies only half-fill the machine, our own clothes etc go in too and as a result we now do about 8 loads per week where we previously did 3 or 4 loads. Five minutes a day to replace the water and stock it with fresh nappy wipes. 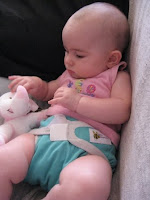 Impact: We are stopping 60 to 70 disposable nappies and about 150-180 wipes per week going into landfill. (Over the course of one baby’s nappy needs, it is estimated parents spend about $2500 on disposable nappies, so we’re making quite a financial saving in the long run also)