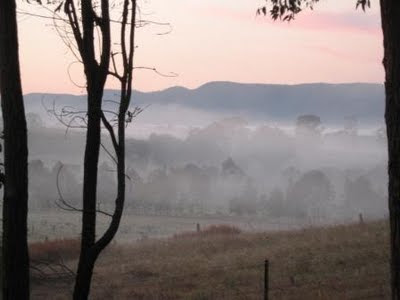 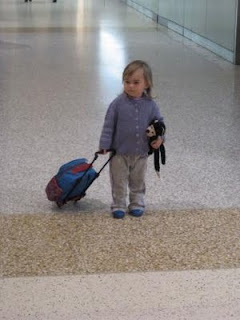 We flew about 7000km, including three take-offs and three landings in large aircraft. We hired a car for one week and drove further than we usually drive in three weeks, including driving within Sydney and Melbourne where there were public transport options available. Friends also drove about 150km in their car to spend time with us. Family drove us around on lovely long day-trips through the Melbourne hills and from regional Victoria back to Melbourne.

We took a holiday from cloth nappies and washing machines and added about 75 disposable nappies to landfill. Our cabin accommodation in NSW did not offer a recycling bin and we left our recyclable items with the ordinary rubbish. When we departed the cabin we left behind three times the rubbish we generally dispose of at home. Hardly anywhere were we able to compost. 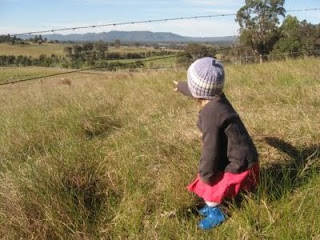 We heated one cabin the whole 5 days we were there (slow-burn pot-belly), cranked up an inefficient old reverse-cycle airconditioner on two cold mornings at another cabin, and happily enjoyed plenty of heating in our family's homes where we stayed with them.

None of the water from our showers was saved for reuse, and shower heads were generally not water-saving models. We used full-flush toilets most places we stayed and, being guests in others' homes, felt obliged to flush every time. As the weather was colder than we are accustomed to, I suspect we had longer, hotter showers, I turned on heat-lamp lighting in the bathroom where it was available, and I ran cold water down the sink many times to get warm water for hand washing/ face wiping, where at home I generally use cold. I'm pretty sure the water heaters were set to a higher temperature than at home and the pipes were not insulated most places we stayed. 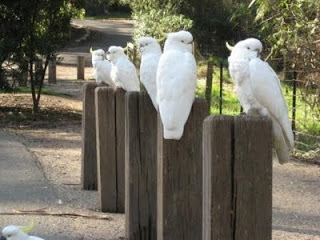 As guests we gratefully used products chosen by our hosts, whether or not the toilet paper was recycled, the laundry powder or dishwashing detergent environmentally friendly, or the coffee, tea or chocolate fairly traded. Given we have almost completely abandoned using alfoil at home, on account of the ludicrous amount of electricity required to produce it, we probably participated in using more alfoil than we will use for the rest of the year. 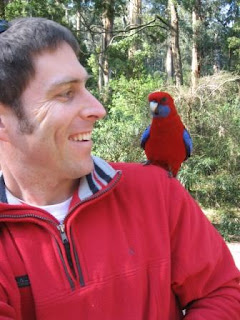 Our food was purchased from huge corporate grocery stores, and much of it had excessive packaging. (Notably, Eva did not enjoy the taste of either mandarins or cherry tomatoes from these stores, two of her favourite foods when purchased from farmers' market or growers' cooperative) We used plastic shopping bags, not having taken our cloth ones with us. I even bought imported out-of-season American cherries - I love cherries and we were so far off the sustainability wagon by that point that I gave in to their shiny blood-red temptation.

Were there any redeeming factors? We did catch trams in Melbourne (for one day!), walk rather than drive to places close to where we stayed, and train rather than drive from Melbourne to Warrnambool (about 270km by rail/ 230km by road) in one direction at least. On the Qantas leg of our flights we recycled our in-flight rubbish (other carriers didn't offer to do this). At our cabin we chose not to turn on the reverse-cycle airconditioner, oil-fin heater or electric blanket. Anywhere we stayed we did not turn on heating in the bedroom and rugged up before turning on heating when we could. All our laundry was dried hanging outside or over racks in an already-warmed lounge-room rather than in dryers. Arguably we saved a whole long-distance flight by bundling trips to Melbourne and Sydney into one holiday rather than crossing the country twice. We paid the carbon neutral offset for our flights, however token that may be in practice. By being away we had our computers turned off for the duration. 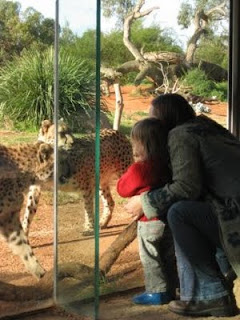 Could we have done it better? Does anyone have suggestions for sustainable holidaying? I'm not looking for an eco-experience saving turtles or the like, just a manageable way to visit my family and friends across the country. I'm not prepared to resign myself to relationship-by-Skype, especially not for Eva's connections with her grandparents. Any ideas?
Posted by Clare Nerida at 10:12 PM 1 comment: