This month we finally bit the bullet and had a go at improving the ethics of our preserved tomato consumption. 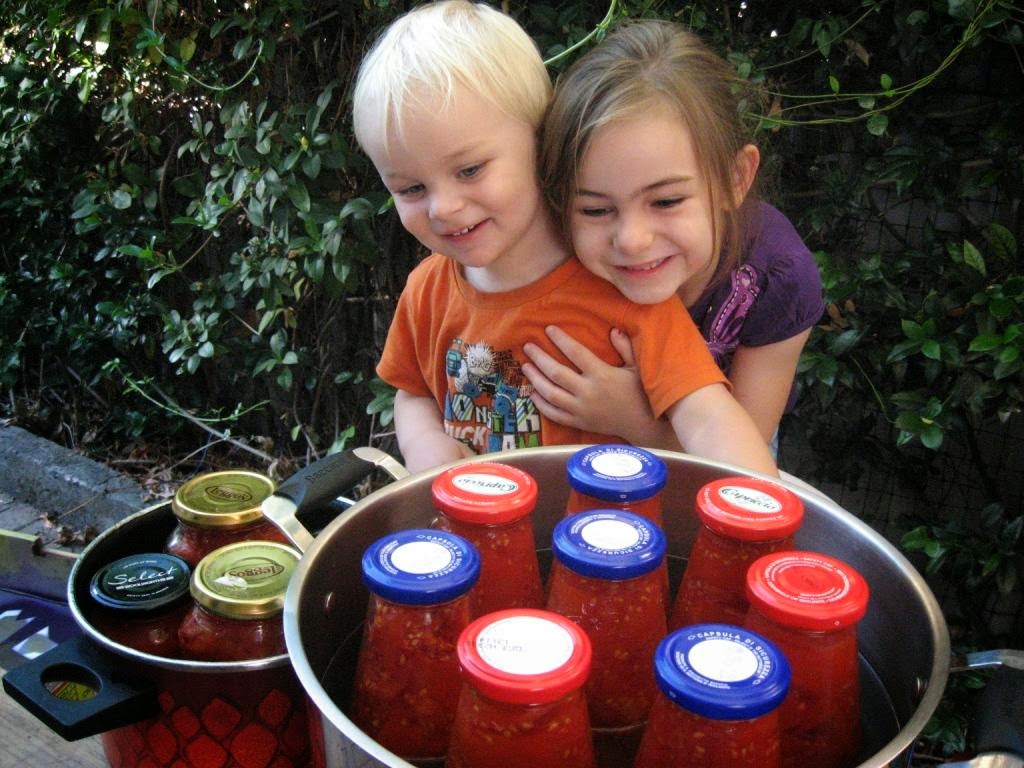 I have known for quite a while that there are major ethical concerns about tinned and bottled tomatoes but doing anything about it just seemed too hard. Cheap preserved tomatoes are so easy to grab off the bargain shelf! But they are also almost always imported, with concerns about the working conditions of tomato pickers in other countries. It is ridiculous that we don't eat our own tomatoes: Australia has the ideal tomato-growing climate, with the things even surviving as weeds in abandoned gardens.

So after a week of unseasonal rain here in late January, Tyson was on the look-out at the farmers markets for over-ripe, excess or slightly damaged produce being sold off in bulk, and came home with a large box of very ripe tomatoes ready to bottle. (He also brought home peaches for jam, so it was a busy weekend!)

Our method was: Wash and quarter tomatoes (ends removed). 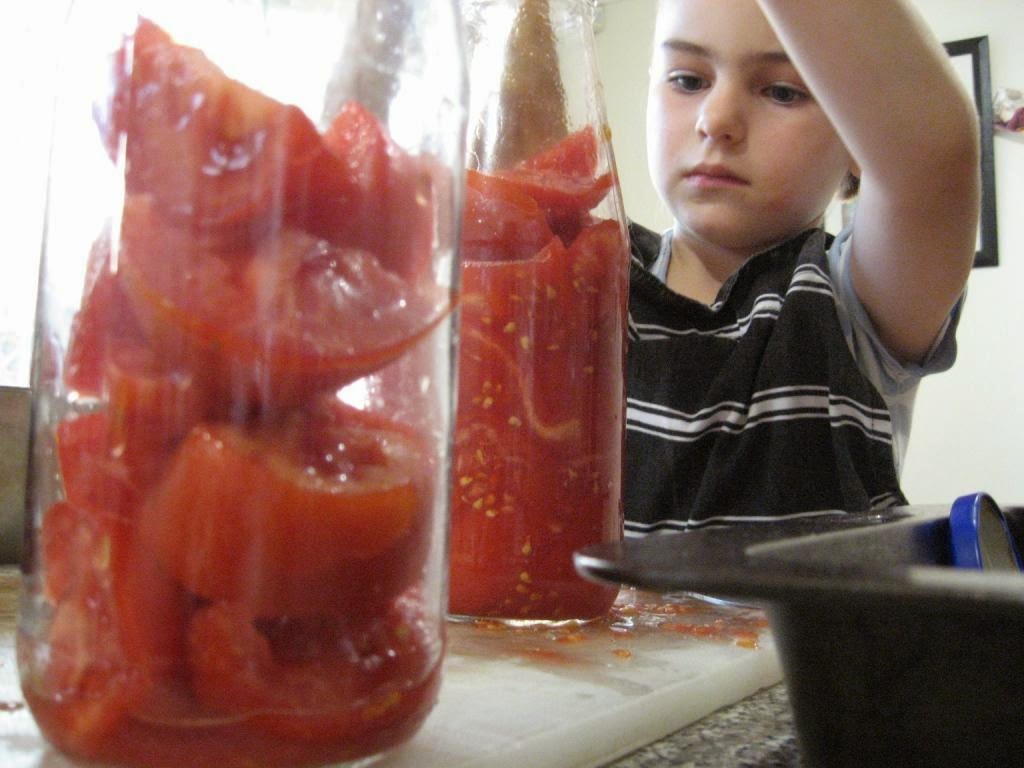 Squash tomatoes into oven-sterilised bottles with wooden spoon, removed air bubbles. Add a teaspoon of lemon juice to cover the top of each bottle before putting the lid on.


Place bottles in water not quite up to their lids and boil for about an hour.

The bottles seal themselves as they cool. It was a very hot weekend, so we boiled them fairly late in the evening and sat them outside to cool so their heat wasn't added to our house. 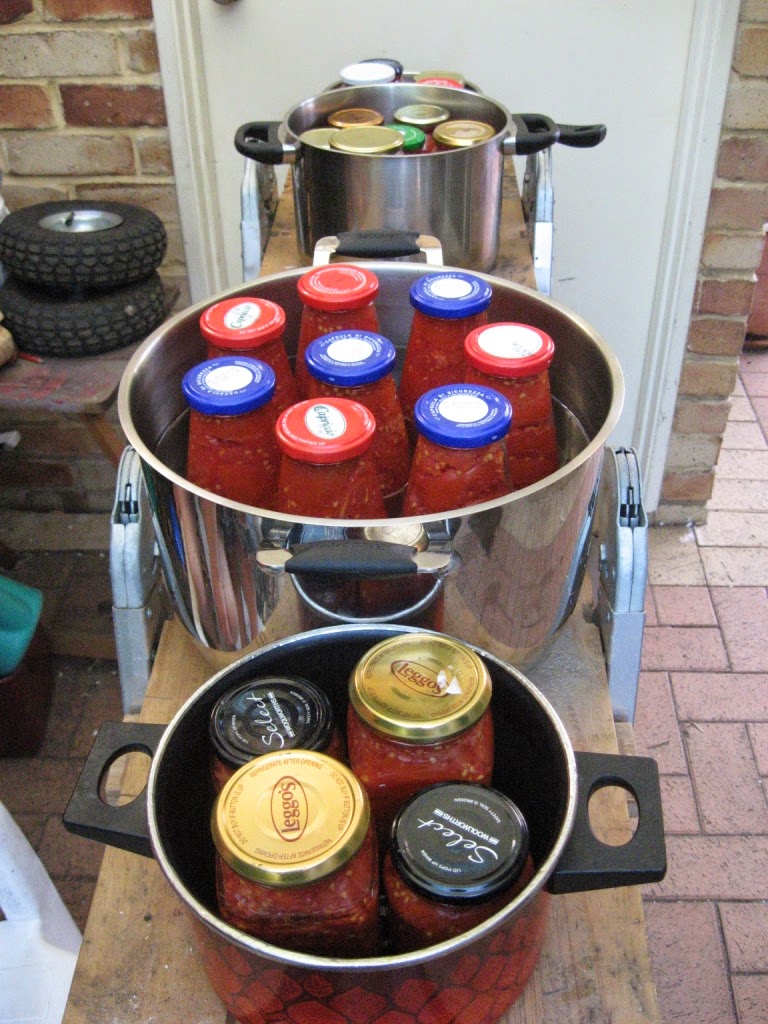 We forgot to weigh the tomatoes, but think it was about 12-14kg of fruit. We ended up with 23 bottles of tomatoes. This should see us through about six months (although as Australians each consume on average 25kg of processed tomatoes a year, perhaps I have over-estimated how long they will last us!). 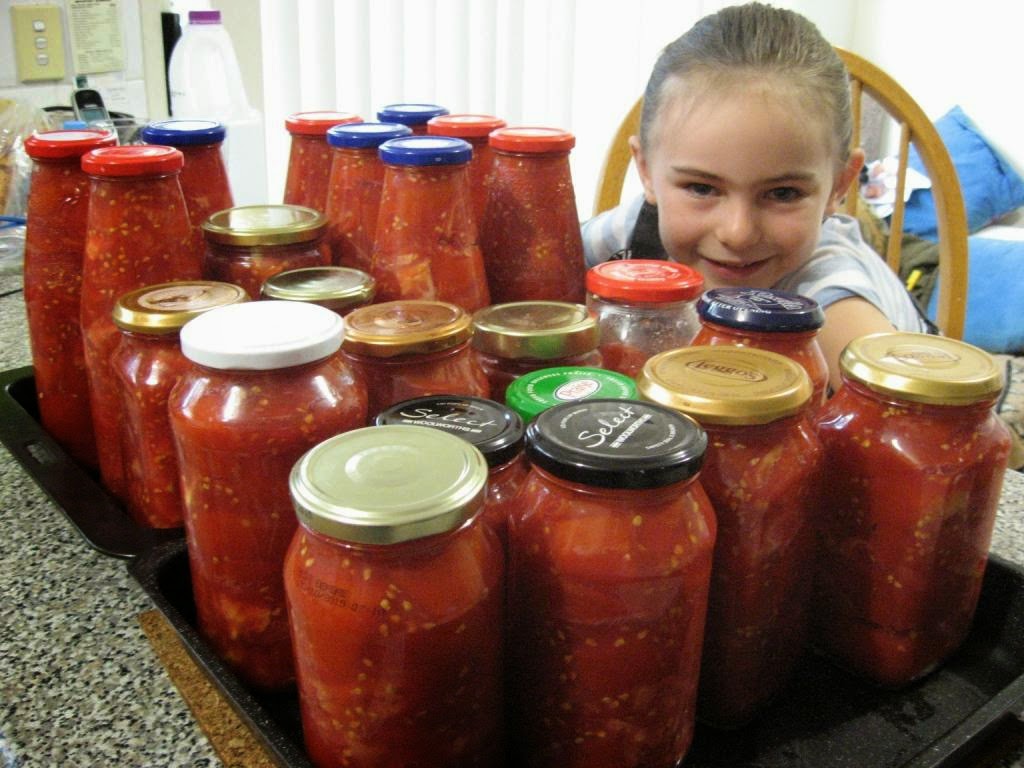 The second part of our tomato commitment, therefore, is to buy Australian when our home-processed stores run out.

Initial Cost: $14 for one large box of tomatoes 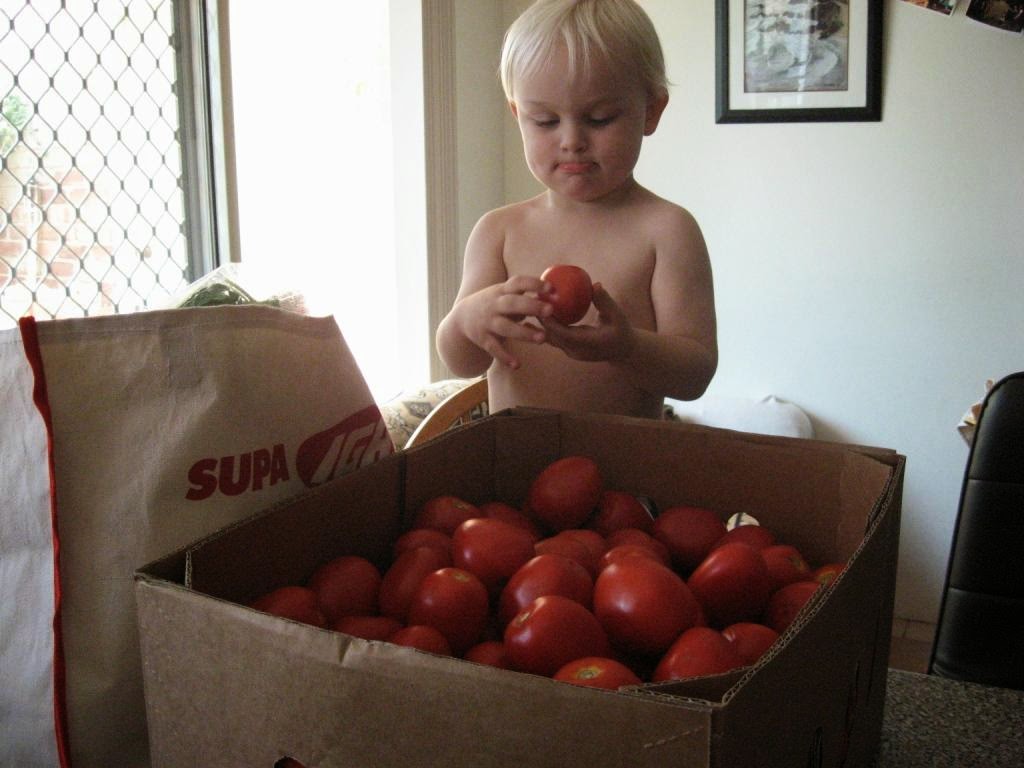 Ongoing time or cost commitment: approximately the same again, once a year; about 50c more per tin of tomatoes once our home supplies run out and we are buying Australian (perhaps $26 more in a year?)


Almost 80% of processed tomatoes purchased in Australia are imported, mostly from Italy. Italy is a journey of around 9,200 nautical miles from Perth (17,000km), taking 39 days at sea. That is a lot of food miles. Despite apparent improvements in recent years, workers' conditions are not as well protected in Italy as in Australia and there are many documented instances of tomato workers, many of whom are African migrants and often without valid work visas, being treated not much better than slaves. Quality standards for farms and processing plants are also less rigorous in Italy than in Australia.

The import from Italy has over the last decade nearly destroyed the Australian tomato industry. Several processing plants have closed (eg Heinz, Rosella). Due to the high Australian dollar, oversupply in Italy, and European Union subsidies to tomato farmers, it was possible for Italian growers to sell tomatoes to Australia at less than their own production cost. This is called 'dumping' and is actually illegal. About 18 months ago an inquiry finally blew the whistle on the practice, and last year the government established tariffs to stop it. As a result we are probably not going see as many 59c tins of tomatoes in the grocery aisles (and should be grateful, not grumpy, about this). Woolworths responded in August 2014 by signing a five-year deal with SPC Ardmona to source Australian tomatoes for their store-brand tomato lines. SPC is now looking to double the size of its tomato processing plant, which two years ago was under threat of closure. But for this hopeful news to become a good outcome, Australians need to abandon our baseless infatuation with 'Italian tomatoes' as a synonym for value and quality, and support Australian growers and producers. 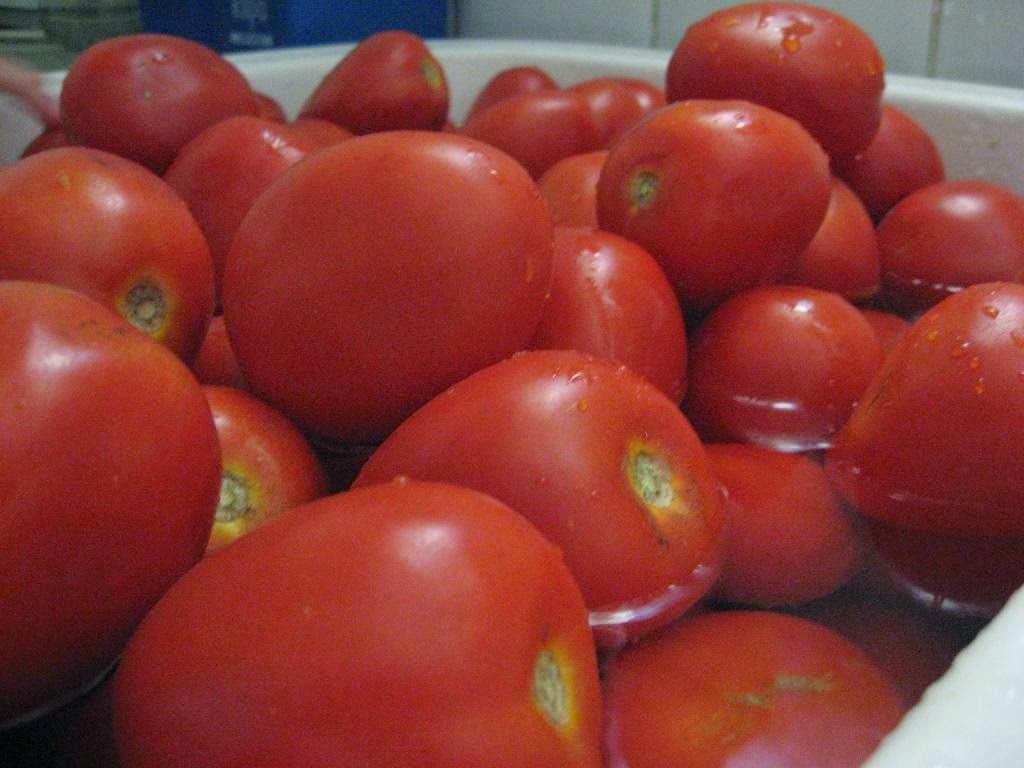 Supporting Australian food producers is not charity. It is in MY best interests to have a robust domestic food industry. It is in MY best interests to have a healthy local economy with plenty of rural and manufacturing employment opportunities. For the reasons outlined above, and drought in tomato-growing regions of Australia for most of the years of this century, Australian tomatoes are generally more expensive. This is despite Australian growers being literally twice as efficient as their Italian competitors in how many tonnes of tomatoes they produce per hectare (150 tonnes compared with 74 tonnes). I am prepared to pay a little more for my tomatoes to support food security and Australian economies. Tomato farmers at present make about 4-5c profit on each 400g tin of tomatoes sold ($100-$125 per tonne after production costs) which is a pretty slight margin to be living on. At the bottom of this post is a bit more information about how to identify Australian tomato products.

So after all those reasons to support Australian producers, why are we bottling our own? Several reasons:

- 'Local' is a bit of a stretch for us here in Perth. The three surviving Australian tomato processing plants are in Echuca and Shepparton Victoria and Jerilderie NSW - at least 3,300km from me (Echuca). West Australians grow tomatoes too, and I would like to buy their produce when I can, which means buying it fresh from our local farmers' markets. (Supermarket tomatoes are not necessarily fresh or local: check out this short video from Local Harvest). 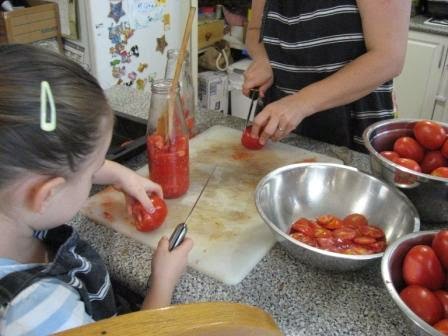 - The biggest Australian producer, and the one it is easiest to find on supermarket shelves, is SPC-Ardmona (based at Shepparton - the 'S' of 'SPC'). SPC-Ardmona is owned by Coca Cola, a company with boycott calls on it due to its involvement in torture and murder of union leaders in Latin America (who were protesting terrible Coca Cola work conditions) and destruction of water supplies for communities in India, as well as varied complaints in many other countries. I want to support Australian producers but I don't want to support Coca Cola, so I am balancing out buying some SPC with doing my own bottling.

- The amount of packaging used in commercial products leads me to want to do my own processing at home - even if much of the packaging for tomatoes is recyclable, not all of it is, and it still carries the energy use of producing and transporting that packaging. The jars we uses were saved from shop-bought tomato products and will be used many times over.

- Although tomato farmers pay their picking contractors appropriate wages, it is not always clear that the contractors pass a fair wage on to the individual pickers who, in Australia as overseas, are often migrants, minorities, non-English speakers, etc, who don't always have the ability to speak out if they are not being treated fairly.


- Buying bulk over-ripe fruit saves food from going to waste. It also means we are bottling the tomatoes in season, at the peak of their flavour, which is not always the case for commercial products. We have the option to use organic produce (although on this occasion we did not) and we know exactly what goes into the jars and don't put any chemicals or additives in (like the mysterious 'thickening agent' in one brand of tinned tomatoes on our shelf).

- Its fun! Really. Eva and I had a lovely afternoon together working on the tomatoes. She insisted on being involved for the entire process, long after I expected she would get bored. She loved getting thoroughly tactile with juicy, squashy fruit. She enjoyed the challenge of getting as many chunks of tomato into each jar as possible, and removing all the air bubbles. She is learning kitchen skills, like handling a sharp knife, as well as a sense that all manner of challenges are very possible to achieve. Being involved in processing our own food also teaches our children where their food comes from and, in my opinion, gives them a greater appreciation of what comes out of packages. 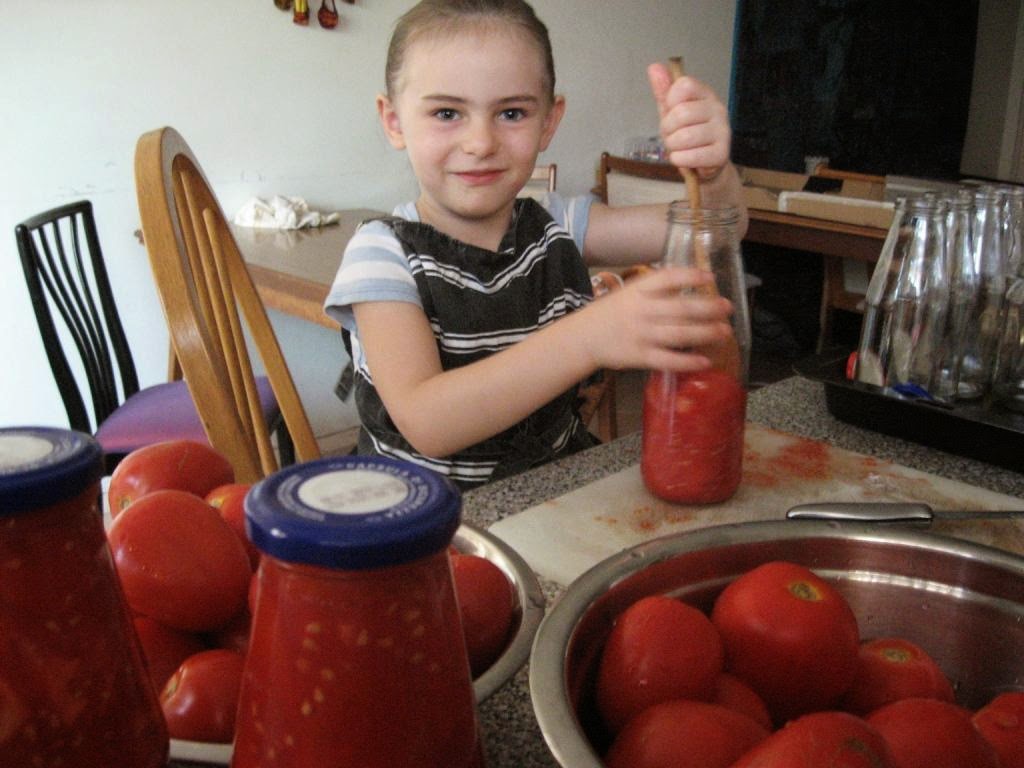 The best article I read on the tomato industry (although note this is from May 2012, before the inquiry into dumping and the Woolworths deal, so things were looking very grim at the time)

A more readable analysis of these findings

About Woolworth's deal with SCP-Ardmona (August 2014)

A current social media campaign called 'No farmers No food' captures something of my reasons for trying to support Australian food growers and producers. (They also have plenty of catchy, shareable graphics to pass around)

How to identify Australian tomatoes:

SPC-Ardmona, based at Shepparton Victoria; owned by Coca Coal Amartil. Tomato products are mostly branded 'SPC', but SPC also supplies to some other companies, such as Woolworths (but not all Woolworths tomatoes are guaranteed to be from SPC).

Kagome, at Echuca Victoria; a subsidiary of the Japanese tomato company of the same name. Kagome claims to be 'Australia's largest grower, harvester and processor of tomatoes'. They only sell wholesale to other producers, so you won't find anything on the shelf labelled 'Kagome'. Their website http://kagomeechuca.com/ has a graphic at the bottom showing specific products that are 100% Australian tomatoes.

Billabong from Jerilderie NSW, a family business who claim to be 'Australia's ONLY wholly owned, made, and grown cannery'. Their products are branded 'Billabong Produce'. I am investigating whether they can be obtained in Western Australia (check comments for updates).

Brands that are using 100% Austalian tomatoes (mostly supplied by Kagome):

Brands that use Australian tomatoes but sometimes blend with imported stock (depending on availability):

There may be others this list has missed, so its always worth checking with the supplier. Enjoy your tomatoes!
Posted by Clare Nerida at 9:30 AM 2 comments: Links to this post