When we bought cloth nappies we considered the instructions about how to wash them somewhat over the top, and scaled our practice down a great deal. However, I did sufficiently listen to their advice to 'wash in very hot water' to set the washing machine temperature to about 35 degrees (Celsius!) - less than half the recommended temperature, but definitely not cold. Recently I decided to try washing the nappies on cold for a while and see if it made any difference. Results: no difference whatsoever to the quality of wash. (Tyson now tells me he has always washed on cold and had no idea I was using hot water) Our washing machine is now permanently set to cold. 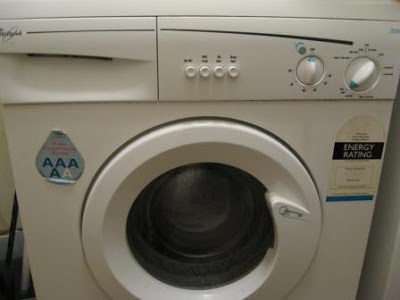 Initial Time: Fractions of a second to turn the dial. Several weeks of assessing whether the nappies were really coming clean, but that was testing rather than time taken to make the change.

This calculation is based on our estimate that a wash uses about 70L, which is about how much we could capture last summer when we were bucketing from the washing machine, if we emptied buckets between the wash and rinse cycles. It takes 1 unit of energy to heat 20L of water by 42 degrees, and water generally starts at around 18 degrees. As cloth nappy users, we wash pretty much every day.

The information we could find on either the washing machine itself or the web claims our Whirlpool WF665 front loader uses only 307kWh per year to heat an undefined amount of water to 'warm' every day (presumably the hottest setting) and suggests the machine uses somewhere between 55 and 60 L per wash, varying depending on the size of the wash load. Our experience of catching the water, and the physics of heating water, suggest these claims are not accurate.

It is not possible to calculate accurately how much we are saving if the 307kWh claim is true, as we can't tell how much of that energy is for heating the water and how much for operating the machine. However, newer machines that Tyson has seen through his energy auditing work show energy use for both cold and hot washes, and he says that generally hot washing is rated as using 5-8 times the energy of cold washing. At five times the energy, based on 307kWh per year, changing from hot to cold would be saving us 245.6 units per year (244kg of CO2). Possibly a little less as we were not previously using the highest possible temperature setting.

Its not about the money, but just to give an idea: that's between $60.10 (based on Whirlpool's figures) and $126.51 (our figures) per year at the current cost of electricity.

I think its time I stopped trying to assign actions to specific months! We remain committed to monthly actions but in reality we take things on as we think of them and sometimes that means four in a week and other times nothing for several months, or just recognising after a long time that an established practice is in fact a sustainable practice but we hadn't thought about it that way. And I blog infrequently, in sudden rushes like today.

We have been public library members and users for years, and signed Eva up when she was tiny. I have been a long-time collector of picture books, and at least half of those I purchase are from second hand book shops, most commonly the shop selling discards from the State Library of Western Australia which sells children's books for $1 each. Some of these are torn or drawn in, although very rarely in a way that reduces the enjoyment of the book, but most are simply surplus to the library system's requirements. 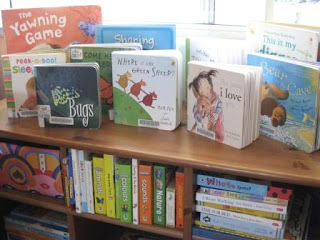 Initial Time: Joining the public library took about ten minutes, and for Eva was even easier, as a rep from the library visited our mothers' group.
Initial Cost: Zero.
Ongoing time or cost commitment: Public library membership is free. A library trip takes about half an hour. About once a year there are a few extra minutes to renew our membership records. I can lose an hour easily in the discard bookshop, especially at sale time when extra piles of books are brought out. I rarely make a special trip but I seem to find myself there anyway (mostly because I do research work that takes me to the Battye library, in the same building).
Impact: We borrow about 200 books in a year, mostly picture books for Eva. If we were to purchase these books it would take about 40kg of paper, as they are mostly board books. Once she graduates to soft paper books this could reduce to only 20kg of paper per year to keep her supplied in paperback picture books, or rise closer to 70kg for a year's supply of hard-cover picture books. (I've just weighed piles of books and was very surprised to find hard cover paperbacks weighing so much more than board books!). I don't know how to calculate the quantity of ink used to print these beautiful books but at a guess they substantially do not use natural dyes!


I admit to some discomfort about not purchasing books new. I value the high quality of children's literature produced in Australia (and elsewhere) and I recognise that borrowing or buying second hand makes it harder for the industry to survive. This is one of the ways I justify to myself that I do also purchase new books. Since Eva got into books, nearly every book I have purchased for her has first had several runs from the library until we are sure it really is a winner. I also try to support actual bookshops, especially independent stores (including Oxford Street Books , Lane Bookshop and St Johns Books Fremantle), rather than purchase online, as I value the atmosphere of a real book store and its contribution to a neighbourhood. There is no bookstore in our neighbourhood at all and this seems a terrible loss to me.
Posted by Clare Nerida at 3:38 PM 1 comment: Links to this post