Recently we purchased a heavy-duty 140L plastic wheelie bin from Weatherworks designed to capture and distribute water from our washing machine. This is a great alternative to a plumbed-in grey water system for those of us in rental properties who can't make permanent changes. 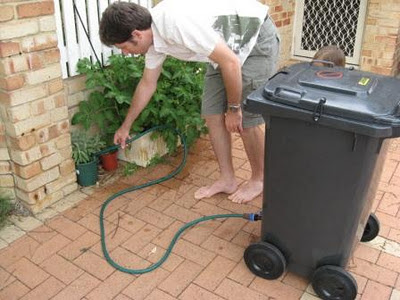 The washing machine pipe hooks over the side of the bin, which sits next to the machine while it is operating. We sometimes tie a bit of rag around it to catch the lint, as in the photo below. 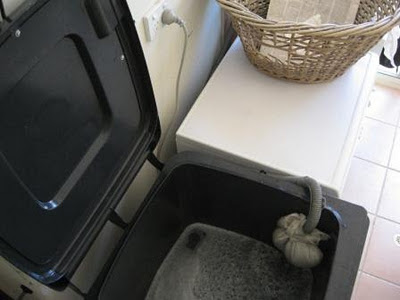 We then wheel the bin outside to where water is needed. A tap fitting allows for a hose attachment, or we often just bucket it out straight onto the garden. No more lugging buckets all over the place! 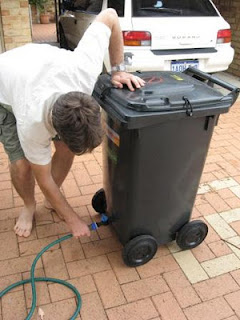 I like the hose attachment, but Tyson finds the water flow too slow so goes with buckets most days. We don't have lawn (except for on the verge, where our rear neighbours water HALF of the front verge and our other-side neighbour gives a less-intense sprinkle to 'our' half, resulting in a very obvious divide between lush green lawn and the patchy brown hanging-in-there covering we are satisfied with) but these bins are designed to flow slowly enough to gently 'flood' a lawn area. Some models are also designed to catch roof run-off. More expensive models have an in-built pump so that you can water at pressure as from a garden tap.
The bin is reasonably easy to manoeuvre, although its four single-direction wheels sometimes make turning corners a bit of a heave. However, we have still decided that it is probably an activity best avoided by a pregnant lady, so Tyson is doing all the bin wheeling for now.
Initial Time: However long it takes you to decide on the what and how of a new purchase. The guy we bought from delivered it to us for free, as we were not too far away. Setting it up by the washing machine takes no time at all.
Initial Cost: $180. We chose to support a local small business, which often has a stall at our farmers' market. We could have bought a cheaper one if we had it shipped from Melbourne or went with a two-wheel single-axle version from Bunnings.
Ongoing time or cost commitment: Watering the garden still takes time. There is just no getting around that unless you go with an irrigation system that does the whole garden just by turning on and off at a tap. But its only about 15 minutes most days, and Eva loves watering with Tyson. 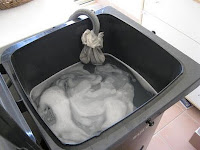 Impact: We are capturing about 60L more water per wash than our previous system of buckets in the wash trough allowed. This photo shows the water level after one washing load, which gives an idea of how much we are catching and recycling.
Tyson has decided that even with this extra water our vegies need more than we can capture through this hottest part of summer if they are going to give us anything more than scruffy leaves, so we also turn on the drip irrigation system from the mains for about 3 minutes each day (it uses about 25L/minute).
Posted by Clare Nerida at 2:55 PM 8 comments: