One too many rounds of frozen fruit at the back of the fridge and I decided it was time to replace our refrigerator. 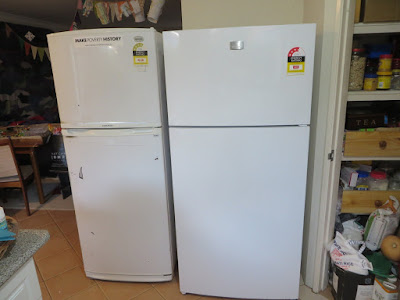 The old fridge had served us for eleven years. It was secondhand, so had a couple of years life already before that. On average, your fridge makes up about 16% of a household's electricity use; it seems our old one accounted for between 25% and 40% of ours.

Tyson did the research and sourced us a brand new fridge that was the most efficient model we could afford. Although almost 50% bigger (inside - strangely, not 50% bigger outside) it was rated as using only about 60% as much electricity. 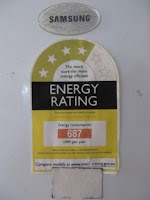 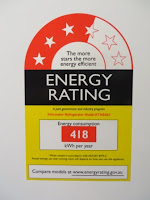 However, Tyson hooked up a nifty device to check how much electricity the fridges REALLY use. 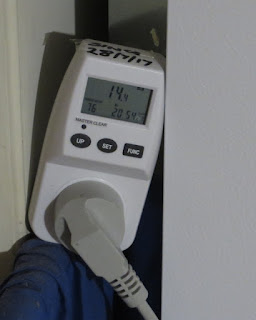 We measured the old fridge for two days before unplugging it and found it used 4.8kWh in 40.5hrs - which works out at 1,038kWh per year - considerably worse than it is rated. Given that we measured in the middle of winter, it is likely that the actual number is higher than that, as the old beast would use more electricity in summer.

On these figures, the fridge pays for itself in 3yrs 4months. However, as I imagine the difference between the two would be greater in summer, it is likely to be even less.

But what of the embodied energy used to manufacture, transport, sell and ultimately dispose of the fridge? This academic paper by Jenessa Doherty (York University Faculty of Environmental Science, Toronto, c.2015) calculates everything from raw material extraction to the fridge reaching a customer, comparing a fridge that is approximately three times more efficient than the one being replaced, which saves 935kWh a year. She determines that the embodied energy in a new fridge equates to equates to between 2.3 and 2.9 years of electricity savings (depending on what portion of fridge is made from recycled materials, and whether there is a computer in the fridge - high in trace metals). Other websites, which were mostly much more vague, also threw around an approximate three-year figure.

This doesn't allow for disposal. However, it looks like from around November 2020, electricity savings on the new fridge will have paid off both its embodied energy and its purchase price, and it will be all savings from there on.

And that is without calculating how much less food we are now wasting as the fridge is doing its job properly at last. 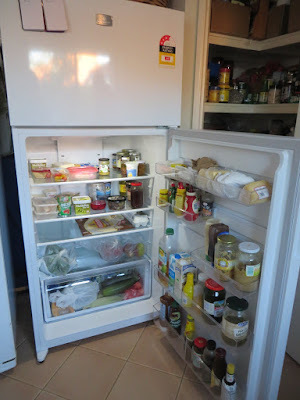 (The gpo power meter cost $49 for a pack of three. We are now measuring electricity use of the computer system, washing machine and fridge. I will let you know if anything exciting results)

www.energyrating.gov.au - Australian government website where you can compare energy ratings for specific models of a whole range of products, if you no longer have the ratings sticker that your appliance came with.

Posted by Clare Nerida at 10:47 PM 2 comments: Links to this post 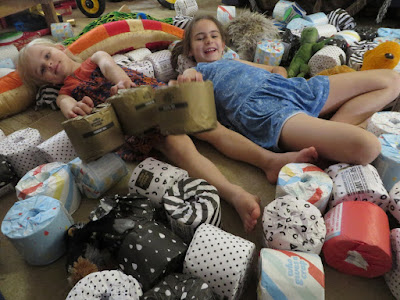 In addition to being made of either recycled paper, sugarcane or bamboo fibres, and being produced with less water use than most toilet paper, WGAC donates half their profits to build toilets for people don't have access to toilets. Which is 40% of the world's population. 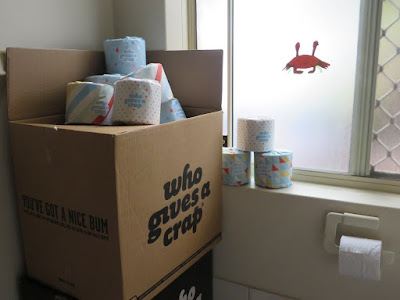 Initial Time: fifteen minutes getting online and placing an order.

Initial Cost: $48 for a box of 48 'double length' rolls. Orders over $30 are delivered free, and arrived very promptly. Due to a *slight* miscommunication between Tyson and I about who was ordering the toilet paper, we started with 96 rolls. But as you can see, 96 rolls of toilet paper are good for many things besides wiping bums. 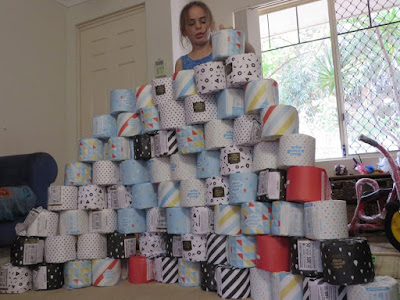 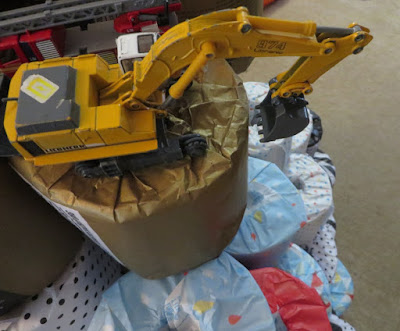 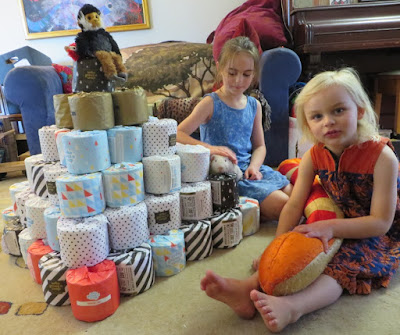 Ongoing time or cost commitment: As above, repeat.

Impact: Five years ago I wrote that Australians use 1.3 billion sheets of toilet paper a day (57 sheets per person), of which 95% was not recycled. I haven't found anything to say this has changed significantly. So the first impact is to continue ensuring we are reducing our consumption impact as much as possible on the toilet paper front. 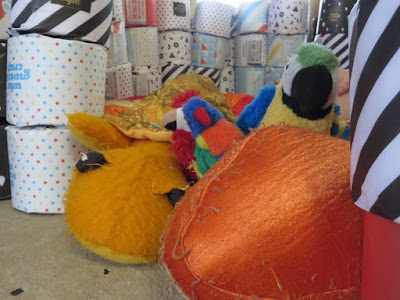 But the more important reason for supporting WGAC is so that our consumption also contributes to improving health, life expectancy, education, women's safety and quality of life for people less fortunate than us.

Waterborne disease is a major killer world-wide, especially of children. Every two minutes, a child dies of disease caused by not having access to clean water; every minute a newborn baby dies of infection caused by lack of clean water. Worldwide, 2.3 billion people do not have access to a toilet, and many of these defecate outside, polluting water sources used by the whole community. Women going to the toilet outside are subject to harassment. Children (especially girls) without adequate toilets are more likely to drop out of school - and 34% of the world's schools do not have adequate toilets. In Sub-Saharan Africa, where nearly half the population cannot obtain clean water, 42% of health care facilities also do not have access to clean water; in South-East Asia, a similar percentage of health facilities do not have adequate toilets. (Stats source) 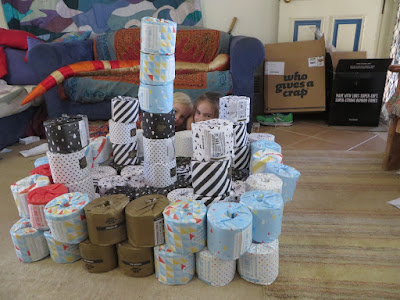 
https://au.whogivesacrap.org/  - Who Gives A Crap main page, inc online shop and plenty of info on the product, and the way money is used to support the poor.

http://www.wateraid.org/au - Water Aid, the main agency WGAC supports - their website also has heaps of information and links about the global sanitation crisis.

http://washwatch.org/en/ - updates on improvements in world sanitation and water access, with funky graphics 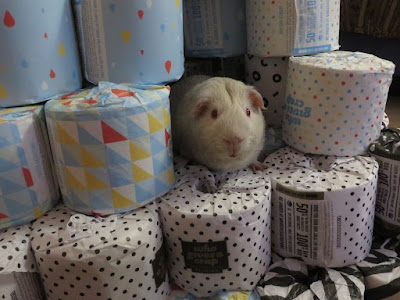 Note: We are not personally associated in any way with this company and have not been given any incentives to promote them.
Posted by Clare Nerida at 10:50 PM No comments: Links to this post

Make an apron from a couch (not a cow)

Tyson spends a lot of time in his shed and wanted a decent work apron. 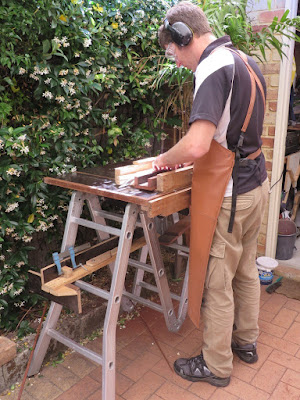 After pricing both pre-made aprons and commercially available leather, it was looking like an expensive project. But then our neighbourhood had bulk waste and the problem was solved. 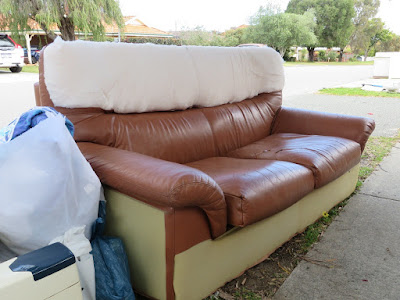 Given the number of leather couches we have seen on verges in the past six months, it seems there is at present a cultural trend to chuck them out. Perhaps the leather is irredeemably cracked or worn - but almost always only on the front. The back is often nearly two square metres of undamaged leather. 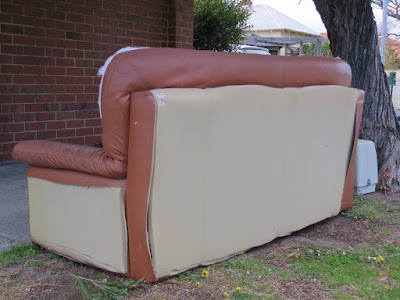 This provided all the leather Tyson needed to craft himself a beautiful apron, complete with clips salvaged from an old back pack.

Initial Time: Cutting leather from the couch down the road was a lot quicker than getting to a shop to purchase new material. Making a hand-crafted apron took many days.

Initial Cost: Two reels of heavy-duty thread and one pack of rivets (approx $15) 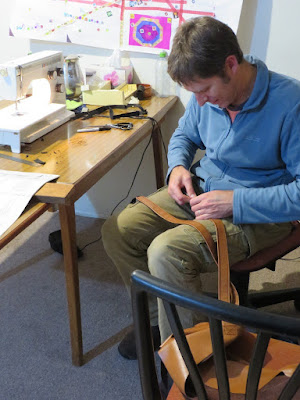 Impact: Lets be honest - this action was motivated by convenience and finance, along with our commitment to recycle/ upcycle wherever possible. I won't bore you again with the figures about how much waste Australians make, but this took a big piece of leather out of landfill.

I have since done a little investigation into the environmental impacts of leather production and it seems this choice was also 'green' on several other counts. (As I am not ethically opposed to the killing of animals per se, this is not one of those counts for me, but it needs a mention as I know it is a deal-breaker for many others)

Firstly, tanning of leather involves toxic chemicals. I haven't found a solid source explaining what chemicals are used, but various (anti-leather) sites suggest formaldehyde, azocolorants, pentachlorophenol, lead, chromium, cyanide, arsenic, sodium sulfide, sodium hydroxide, sodium hydrosulfite and dimethyl amine (along with several other scary sounding compounds that when I looked them up turned out to not be toxic). Several of these are bioaccumulative heavy metals, building up in the bodies of tannery workers, the land on which tanneries are sited and the waterways that tanneries feed into. At the lower end of health concerns are skin and respiratory complaints (and that tanneries smell really bad); at the higher end are risks of blindness and up to 50% higher rates of cancer.

Then there re human rights concerns about the conditions that workers are under while producing leather - much of which reportedly comes from Bangladesh, where protections for workers are acknowledged to be poor. Many leather workers are children. 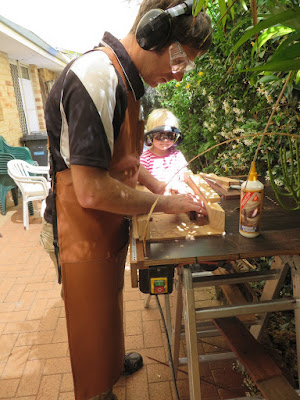 There are also concerns about excessive water use, especially when linked to also polluting waste water in ways that do not allow it to return safely to the ecosystem.

Cattle raising brings its own sustainability concerns (It should be noted that this relates particularly to more intensive forms of farming, which are less common in Australia's cattle industry, although animal rights groups believe the use of feedlots is on the increase here also). And although leather is a by-product of meat production, it is not a waste product. As meat consumption is in decline while leather consumption is increasing, it is likely at some point animals will be raised primarily for their skins rather than their meat.

There are also environmental concerns with faux leather, not least being its use of petrochemicals. Also, as it generally wears much quicker than leather, it becomes waste and needs replacing more regularly than leather products.

Both real and faux leather have the perpetual issues of energy use and pollution in production, transport, packaging and retail. 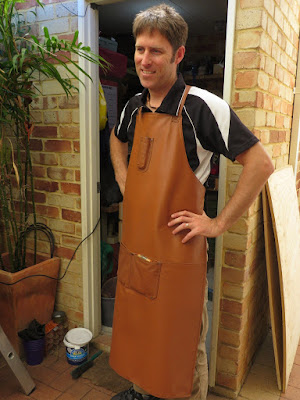 When I searched for 'recycled leather' I found either Pinterist craft ideas for reusing scraps, or options for commercially pulping scrap leather to roll into a new semi-leather product. All good, but meanwhile great big pieces of good leather are going into the bin with each bulk waste collection, as couch after couch is crushed and carried away. Get out there with your Stanley knives people and rescue some leather*!
(*from discarded couches that are clearly too worn out to be reused as couches)

Someone else's blog considering these issues

Info for businesses wanting to recycle leather
Posted by Clare Nerida at 11:38 PM 3 comments: Links to this post