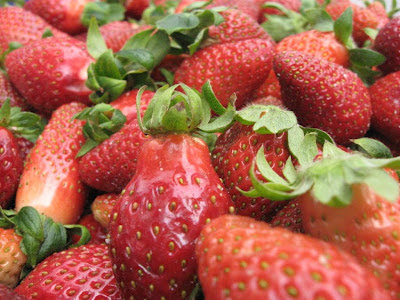 Strawberries are in season in Perth. Last weekend we bought two trays (yes, TRAYS) from the farmers' markets and set about our first ever effort at making strawberry jam.

I liked the idea of making our own jam using bulk seasonal fruit. It was my idea, but Tyson did three quarters of the actual work. 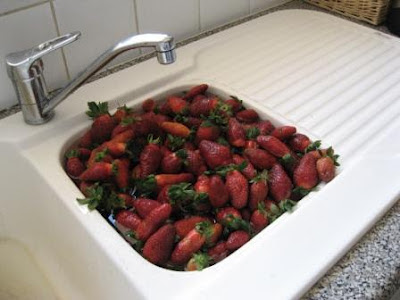 I am blogging about this episode mostly because it was so much fun taking photographs of huge quantities of bright red strawberries. Possibly the only reason one might install a white plastic sink in a kitchen is because it looks good when full of big ripe strawberries. 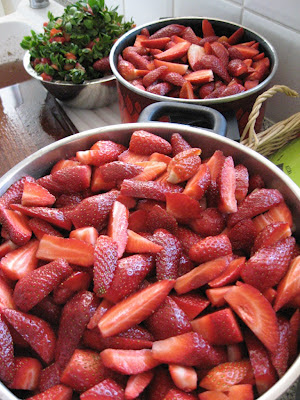 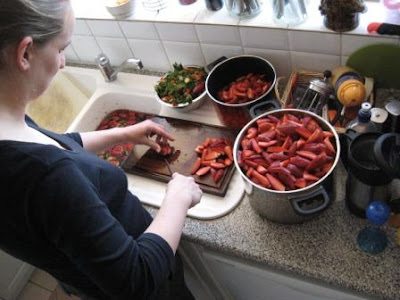 We bought 7.5kg of strawberries, which once ends were removed and we had eaten quite a few put 6kg of fruit into the pot. Plus 1kg jam setting sugar, 6kg regular sugar and juice of six lemons. 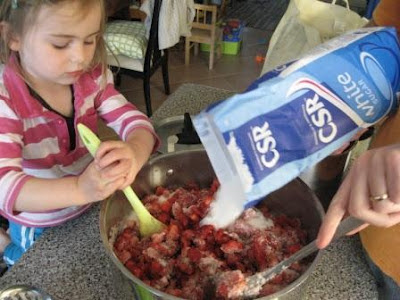 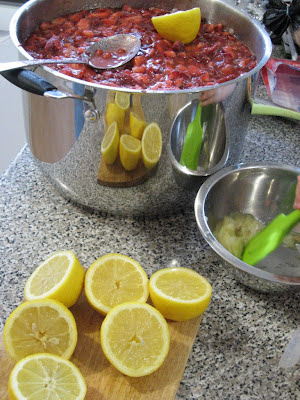 The lemon rinds were cooked in the jam until it started boiling. 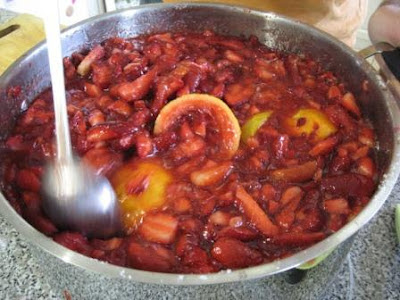 After standing at the stove stirring the simmering pot for quite a long time, Tyson told me I should write on this blog that having babies has addled my brain. I think I should translate that as: we are not making strawberry jam again. 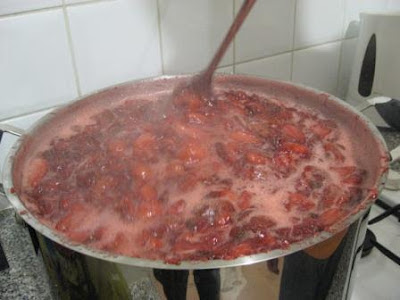 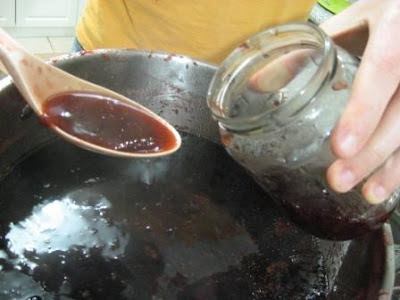 Never mind, we have enough from this batch to last us about two years. Final quantity was around 11 litres. 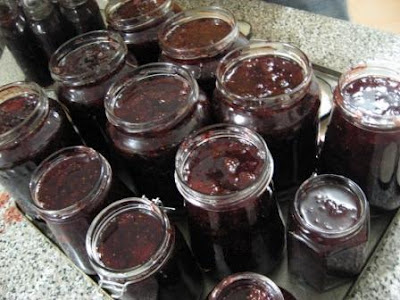 It tastes delicious, even though it is a little runny. It was also good as an icecream topping - hot, straight from the pot. 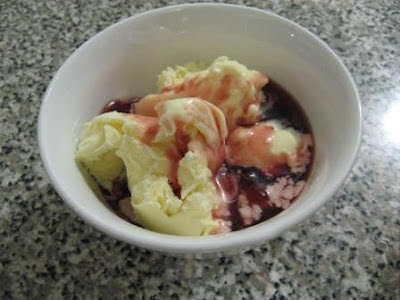 Initial Time: About 4 hours. About half of this was preparation (washing & chopping fruit, squeezing lemons, sterilising jars, etc) and the other half cooking time. If the pot had not been quite so full we would not have needed to supervise it so closely to prevent it boiling over.

Initial Cost: We picked up two trays of strawberries for $18 (total). Sugar cost another $16. Jars were all recycled containers. As we forgot to pick up lemons from Grandma's we did spend $6 on lemons, but if we had been a tiny bit less forgetful they would have been free.

To purchase 11 litres of jam would cost, I estimate, around $70. If it was quality gourmet jam that figure could double. Making it ourselves is a substantial cost saving, even with over-priced lemons. I have begun giving jars of jam away to people who visit our house, though, so we are not really going to come out vastly ahead.

Ongoing time or cost commitment: Zero. This was a once-off.

Impact: For ages I have had a pet peeve about sustainability blogs that are basically recipe sites, and now here I am writing two blog posts in a row about food. I can only say as I did with the plums: I KNOW this is not saving the planet, but it is one tiny tiny step. It is about shifting our thinking to include more than convenience and price when considering food.

Food sustainability IS an important issue - for reasons neatly summarised at this website. As far as I can tell, jam available in supermarkets in Western Australia is all imported - either from other parts of Australia or from overseas - although smaller outlets probably market the few local gourmet lines. When we committed to buying only WA cheese I discussed issues of sustainability for food transported to Perth, and they apply again here. 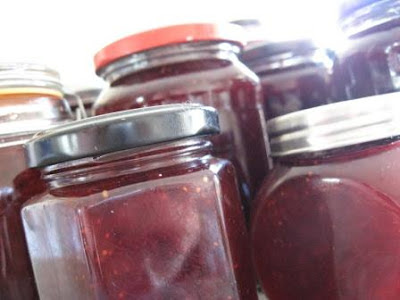 There is a certain trendy romance among 'sustainabilty types' (am I one of these?!) about getting into preserving seasonal foods. My mum alludes to another side of the story (and I preface by saying this is all my slightly fuzzy recollection of her stories which I have not checked with her. Mum - feel free to use the comments section to make amendments!). She grew up in rural Victoria, and her grandfather was an orchardist outside Melbourne. He planted a small orchard in their Wimmera backyard to ensure his daughter and her family always had fresh fruit, and they had it in abundance. He would also periodically buy up seasonal fruit that was available cheap at the Victoria Markets (where he sold his own produce) and put a crate of whatever was going on the train to mum's family. What did a rural family of the 1950s do with all this fruit? Preserve it, in a multitude of ways. While there were obviously many happy times shared over fruit preserving, it was not romantic or trendy. It was laborious work, in a hot kitchen, often through hot summer days (so many fruits are in season in summer!). The fruit, not the workers, chose the time of the labours. It was the women who did the work, including my mum and her three sisters.

Whatever my concerns about unsustainable food practices, over-packaging, transport, preservatives, etc etc, I must remember that convenience is not always a dirty word. Mass production frees me to choose what I want to spend hours on. Women in particular are able to make all sorts of choices my mum and especially my gran could not make. If she were alive today I would hope my gran would never need to bottle another fresh fruit again - and that she might forgive the runnyness of my first over-ambitious attempt to do it myself.
Posted by Clare Nerida at 11:09 PM 5 comments: Links to this post

We continue to buy our fresh food at the farmers' market, which helps us to shop seasonally much of the time. However, both Eva and I prefer stone fruits in our winter porridge, so storing some for out-of-season eating was required.

Plum season is autumn, so as it came to a close we purchased about 3kg of plums to freeze for winter. That was 21 small plums and 13 large ones.

They were diced and put into recycled take-away containers in portions each suitable for one serve of porridge. We filled seven containers, equivalent to 42 servings.

Through winter we have been thoroughly enjoying our plum porridge. The plum supply won't last us until summer fruits are in season (our freezer is not big enough for that!) but it has nicely tided us through the bulk of winter.

Initial Time: About two hours. This would probably have been considerably less if Tyson hadn't needed to make the PERFECT segment dividers for our plastic boxes (crafted from carefully measured pieces of plastic box lids)
Initial Cost: 3kg of plums cost us about $12 at end of season - we could have got them for less but chose to purchase organics. Keeping plums in the freezer costs us no extra, as the freezer would be running anyway. In fact, it may even save us money, as a full freezer reduces the amount of air that needs to be cooled (every time the door opens it needs to be re-cooled) and the thermal mass of the frozen plums assists with the overall cooling.

Ongoing time or cost commitment: Making porridge with Eva helping takes no more than ten minutes in the morning. We don't do it every day, and I could do it in half the time without assistance, but it is a great kids activity in itself so why do it without her?

Impact: Lets be honest, our 3kg of plums are not changing the world by themselves. However, keeping them for winter is one more small act towards shopping seasonally, reducing our supermarket dependence and trying to swing our eating into more sustainable practices.

If we purchased preserved plums instead we would be supporting manufacturing that includes issues of food transport and storage (as discussed in my post on farmers' markets), packaging, electricity for plant operation and chemicals in preservatives as well as those used to clean the factory.

Having ready-chopped portions of fruit on hand also encourages me to bother with cooking porridge, which is a healthy way to do breakfast and also engages Eva in creating her own food.
Posted by Clare Nerida at 3:47 PM 2 comments: Links to this post