Even the most efficient water heating systems still face the problem of water cooling in the pipes before it reaches the point of use. We collect about half a bucket of cold water in our shower before the hot gets there, and a substantial amount of cold water goes down the kitchen sink while waiting for it to warm up also. This month we decided to insulate the water pipes where we could get to them. 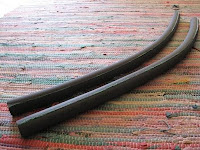 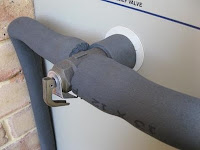 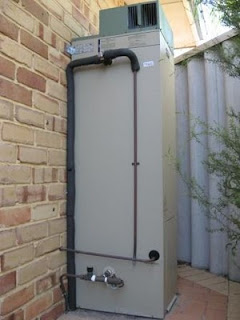 Initial Time: 15 minutes to cut and fit insulation piping on outside pipes. Tyson got into the roof space to see if the pipes were exposed there also, which was an additional time commitment, but after insulating a section of gas pipe by mistake he concluded that the hot water pipes are not in the roof cavity, so I won't count his roof crawling time here.


Initial Cost: We were given four metres of insulation piping free as a promotion from Environment House and bought some extra from Bunnings - $6.89 for a two metre section.

Impact: We still run a lot of cold water in the shower before the hot kicks in, as it is on the other side of the house to the water heater. Its hard to say whether the temperature is warmer once it gets going, as we did this right on the change of season so the pipes are contesting with colder weather than before we made the change. In the kitchen, which is closer to the water heater, we have noticed that the water appears to have less cold delay, and is hotter when it arrives.  This is definitely true in the laundry, which is directly through the wall from the water heater.

I can't give a precise measure on any of that, though.

Update: Tyson has put some measurements in the comments.

Also I think I should emphasise that even when you are not using any hot water, the outlet pipe from a storage hot water system acts as a kind of wick, drawing heat out of the storage tank. Insulating the pipes not only keeps the water we are using hotter, it also keeps the water waiting in the tank hotter.