May 2010 - Weather sealing the front door

The less drafts in a room the easier and more efficient it is to heat. Winter is approaching here and the cold air coming in around the front door was making it hard to keep the living area warm, so this month we added weather sealing tape to the front door to stop the drafts. 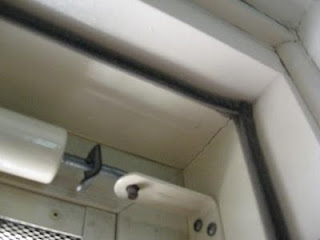 Initial Time: Ten minutes to cut and attach tape (Tyson adds: it would have been quicker if he wasn't carrying Eva on his back at the same time)

Impact: It is noticeably less drafty - and also much quieter! Other external windows and doors to the living space were already weather sealed. I still prefer to wear warm clothes and have a window open as long as I can bear it, though - which is usually longer than everyone else around me. (One former housemate's boyfriend dubbed me 'the ice queen' because of this tendency...)
Posted by Clare Nerida at 10:28 PM