What to do with all old top-loader washing machines that are no longer considered sufficiently efficient? 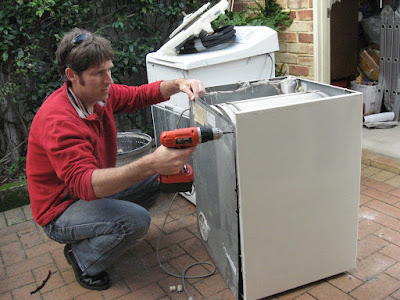 I've written before about upgrading to efficient washing machines but this creates a waste problem as obsolete washing machines relocate to landfill. Earlier in the year my sister bought a house that came with an old washing machine, which she replaced. Tyson has been re-using parts from that machine ever since, along with a second one he 'rescued' from the roadside on bulk rubbish. 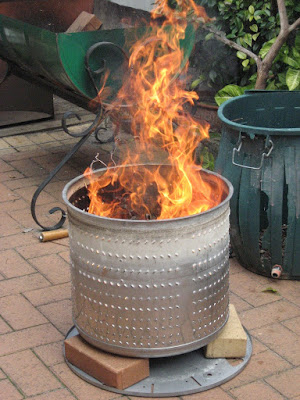 This is the stainless steel drum from a top-loader washing machine removed from its casing. All those little holes keep the fire supplied with oxygen, and ensure warmth is at foot-level as well as face-level.

Tyson also rescued pieces of the electrics to use as the guts for a disc sander. That is, the spinny bits from the washing machine are now spinning a sanding disc. But it was a bit more complicated than that makes it sound - not really a straight swap. 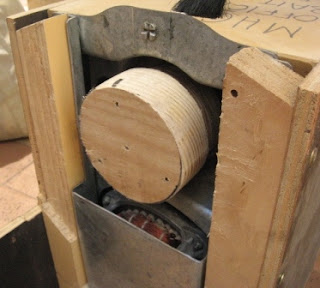 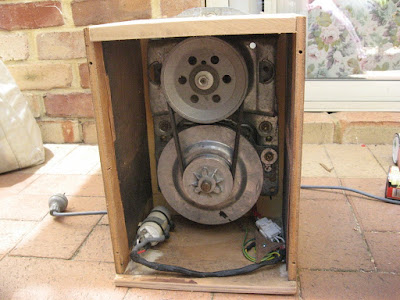 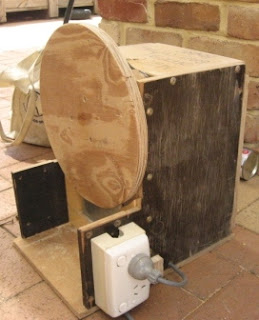 He would like to add that if you are not at least a little familiar with electronics, this should not be attempted. In particular, the capacitor in an old washing machine (looks a bit like a D-cell battery) can retain enough charge to give you a nasty shock even long after the machine has been unplugged. 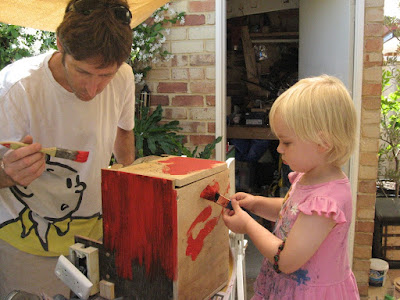 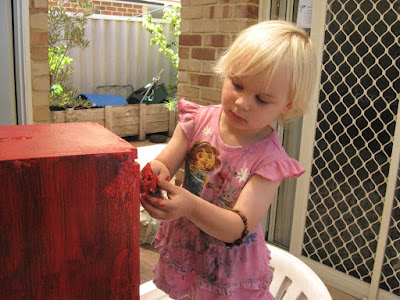 Some of the components of this sander, including the power switch, were amongst items salvaged from Tyson's Grampy's shed years ago, which are still being sorted through at his parents' house. 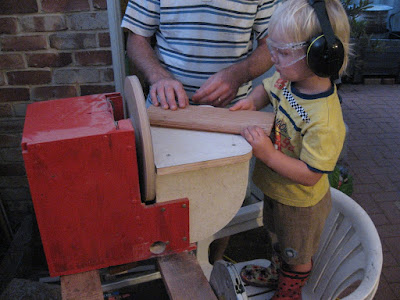 Smaller pieces from the washing machine were also used (along with much recycled timber) to build The Marble Run. Oh, the Marble Run... quite possibly the coolest thing in the world. Built in association with remodeling the children's bedroom without buying anything new. A photo just won't do, so here is a little video clip. See if you can spot pieces that might once have lived in a washing machine. Clue: look for metal.


The timber for the Marble Run was partly left over from building the loft bed (which was in turn largely made from furniture found on the verge at bulk waste time) and partly out of the skip bin for a construction site down the road. 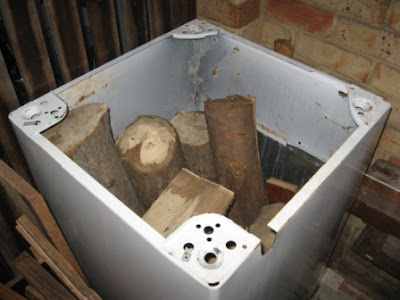 The power cord was reused for the sander. Tyson also salvaged a pile of screws and other bits and pieces for future use.


I believe trendy types call this 'upcycling'. But I am not trendy so to me its just using every possible piece that can be kept out of the bin. Yes, we do have a shed full of things that 'might be useful'. In fact, two weeks ago we acquired a second shed (Thank you gift-ers!) 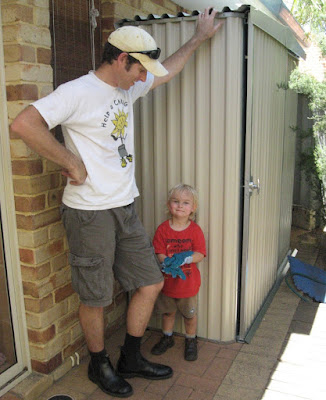 Of course, not everything is re-usable, even with Tyson's handy-skills. The picture at the very top of this blog shows Tyson also pulling apart the old dryer that my sister removed from her house when she moved in (even new dryers are unbelievably wasteful and, in Perth, completely unnecessary, let alone really old ones). He discovered that the metal was inferior quality - flimsy sheet metal  - and most of the dryer ended up as rubbish, although a portion is in use as a shed shelf, and smaller bits and pieces were added to Tyson's stock of construction materials. 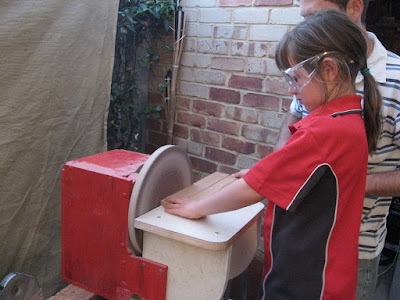 Initial Time: Pulling the first washing machine apart sufficiently to transport it home took Tyson a couple of hours. The second machine was quicker - he had learnt a few tricks by then. Building the sander took many hours snatched in bits over weeks and weeks, but (as with many of Tyson's projects) was also an activity often shared with Small Boy (and Bigger Girl, but it mostly happened when she was at school). The Marble Run keeps getting updates and alterations. The basic straight-run sections took only an hour or two, but if all the modifications were added together it has consumed a lot of hours. Ratio of fun-had-by-children to time-spent-building is still massively on the side of fun, though. So many hours of glee.

Initial Cost: zero for the fire drum; approx. $20 for a set of ten sanding discs and $25 for a velcro pad to attach them to the sander. 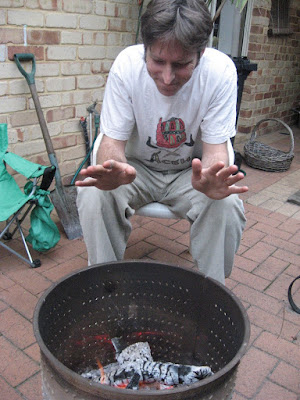 Anything we can do to reduce our waste is a good thing, as Australian households average around one tonne of household rubbish each year. When trying to explain recently to our Small Boy why we use cloth nappies and reusable nappy wipes, I slightly exaggerated by telling him every disposable nappy we threw away was being stored up to give back to him when he was a grown-up (which he pronounces 'donut'). But its only a slight exaggeration. The stuff we put in landfill will be around for our children and grandchildren to deal with into their adulthood. Would we think differently about our waste if we could see our one-tonne-per-year growing into a bigger and bigger pile, which would be ours personally to manage along with our pensions, long after we had all turned into donuts? I certainly would, and I am someone who already thinks about waste. Perhaps I have influenced my Small Boy - last time the truck came to pick up remaining bulk rubbish from the verge he wept and howled to see it all crunched away. 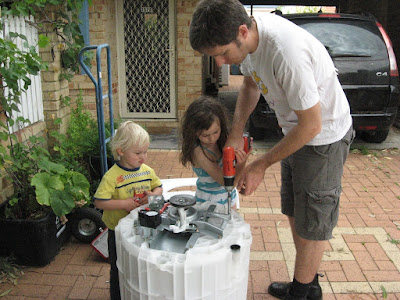 By re-using materials we also reduce our consumption - the opposite end of the cycle. At the consumption end the impact is around reducing the raw materials extracted from the earth to create the objects we desire, the fuel used to transport both components and completed items all over the globe, and superfluous material used in packaging all along the way. It is easy to forget both the origin and the end point for goods we consume - as if they begin life on supermarket shelves wholly created and vanish into thin air when the rubbish truck goes around the corner.


Because of these concerns about consumption, we would never have bought ourselves a fire drum, as its not important enough to us in the scheme of things to warrant spinning the consumption wheel to acquire one (Tyson may have eventually purchased a sander, although he says probably not). A final impact, therefore, is that we are now very much enjoying items we would otherwise have foregone.