When the forecast showed Christmas day as the first in a run of seven days close to 40°C, Perth's hottest week on record, we knew it would test our commitment to sustainable living to its edges. The temptation was to pour water on the garden, crank the airconditioner and stay inside (possibly in front of some energy-consuming electronic entertainment). Here are a few things we did to ride out the week of heat without maximising our environmental footprint. 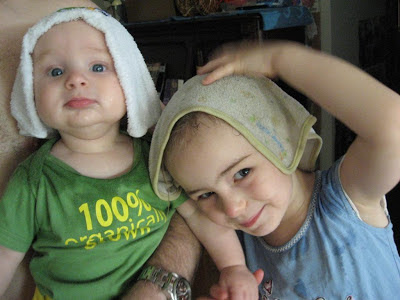 - Wore wet flannels to feel cooler. When I lived in an uninsulated unairconditioned fibro house I used to freeze wet tea towels in a U-shape and wear them around my neck. Now if I am reaching that point I consider we are past the 'bearable' test and its time to turn on the aircon.

- Sent Eva to bed with a squashy ice pack.

- Breastfed baby twice as often... as if the heat wasn't making me tired enough already!

- Kept the fridge as full as possible, filling empty spaces with blocks of ice or cold water, to improve thermal mass by reducing the amount of air to be kept cool. Air is hard to keep cool because it escapes whenever the fridge or freezer door is opened. 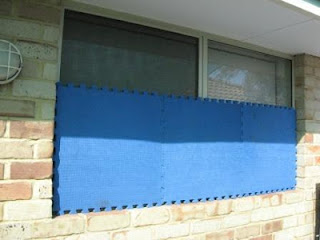 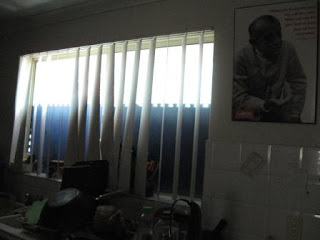 - Shaded everything! In addition to the summer-long emplacements we added some temporary foam rubber mats along the kitchen & rear toilet windows and a tarpaulin over the clothesline. The foam rubber mats make a huge difference. The glass inside was noticeably cooler behind the mats, even before the sun was on the window, and even the cranky thermometer registered about 4 degrees difference between the covered and uncovered glass.

- Washed every day to ensure there was enough grey water for the garden. We always run the washing machine with a full load, so I worked my way through 'sometimes' items (towels, sheets, bathmats etc) to ensure the garden got water every day without having to give it pure drinking water from the tap. On a couple of the hottest days I did two loads and gave the lawn a good soak. 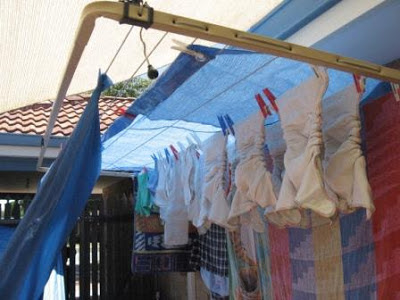 - Played outside in the mornings for as long as possible (for exercise, fresh air and to prevent against cabin fever). Did quiet indoor activities through the worst of the heat (lego, trains, playdough, craft, hide & seek, tea-sets, dolls & teddies, etc). Read a lot of books.

- Had cold or nearly cold showers, cool baths, and used the paddle pool sparingly (and put the water onto the garden when shower/ bath/ play was over). 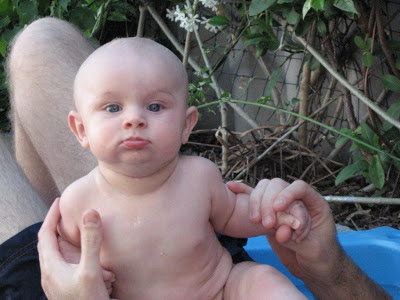 - Were disciplined about the water-catching bowl in the kitchen sink, and got it out onto the courtyard pots any time it was full to help the plants through the worst of the heat.

- Ran fans rather than the airconditioner for as long as this was bearable. We turned on the aircon on four of the seven hot days - on three of those days for only about three hours. On day three, when we used it first, we set it at 28°C. On day five, when it came on again, the walls of our house had soaked up more heat and we dropped the aircon to 26°C. This is easily enough to cool our living spaces. (Due to the location of the air conditioner unit, even running it like a fridge would not really cool our bedrooms).

- At night, opened the house up to cool as much as possible before morning. We ran the extractor fans to help remove the day's heat and placed pedestal fans in the eastern windows (the overnight direction of cool air if any is coming) to help draw in the breeze.

- Didn't cook (or barely cooked). Christmas leftovers helped with this. We also reheated some frozen meals in the microwave. When we used the toastie maker we then put it outside to cool, so that its heat was not added to the inside temperature. We definitely did not turn on the oven, and only used the stove for about an hour in total all week. 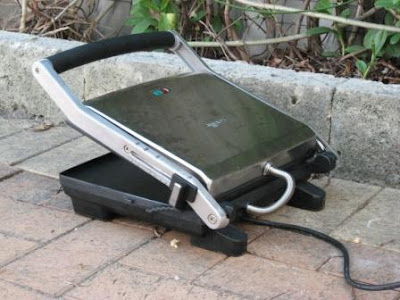 - Went out to places that were cooler (eg the beach, the shady playground beside the lake) or where airconditioning would already be running for other people (Tyson's work, grandparents' house, public facilities). This is not about letting others carry our footprint, but about maximising the number of people each aircon serves, thereby minimising the total number of airconditioners running. On New Year's Eve it was our turn to run the airconditioner on behalf of a group of families. We ran it for 13 hours, but for much of that time had members of up to seven other households sharing it with us.

- Did not increase screen time. We don't have a TV at all. Tyson & I watch a little I-view but Eva is allowed only a very occasional episode of Playschool under extreme circumstances (like the week she was stuck home with hand foot & mouth disease recently). Although I had Playschool in mind as an 'if all else fails' emergency activity for the heat we didn't need to go there - perhaps because the room with the computer is not the coolest room in the house.

Despite being over 42°C on New Year's Eve, with the road still hot under our bare feet at midnight as we watched fireworks in 30°C heat with no breeze, not all the predicted maximums were reached. The average maximum temperature of 39.4°C made it only the hottest week in 34 years, the third hottest week in 116 years of records, and the hottest December week on record, NOT the hottest week ever. Lucky us, eh?! Even though it was only below 25°C for a handful of hours all week, in some early mornings, and didn't get below 20°C at all...

None of these actions had any initial cost, and time commitments were very small (a matter of a few minutes here and there).

The impact is difficult to measure in any precise manner. Certainly if we had not used passive cooling measures we would have run the airconditioner a lot more in the past week. Its hard to say exactly how much energy this would have meant, as it depends on things like the temperature outside, the temperature the aircon is set to, and how much we would actually have turned it on, but the aircon uses (roughly) between 1.5 and 2kWh (units of energy) per hour. Perhaps as much as 100kWh was saved by limiting our aircon use. If we had run it 24-7 for the week it could have used between 252 and 336 kWh in total.

More importantly, we did not significantly increase our demand for power through a peak period of demand. Demand in peak periods wastes energy all year, as the whole system needs to be built for extremes rather than averages. Minimising peak usage has more impact than minimising average usage.

I'm quite pleased with how well we did. One more day and I think I would have collapsed. But then, if one more day had been forecast I would have paced myself for eight days as I paced myself for seven this time. Tyson thinks any of our more usual three or four day heat waves for the rest of summer will seem so easy to manage by comparison that we may not turn the aircon on again all season. I have my doubts. I've booked a holiday to southern Victoria in a few weeks to visit my parents rather than ride out the whole summer here - thereby, in two cross-country flights, practically wiping out any footprint gains we make by reducing our domestic power usage here. Ah well. Its about small steps.
Posted by Clare Nerida at 3:27 PM