This is the time of year when a number of our water and energy saving measures need to be reinstated for summer. Doing so involves a recommitment to these actions and, for some, a small degree of maintenance.

So our 'action' for November was not a new action but a recommitment to many previous actions, and in some ways it was the hardest 'action' I have committed to in the three and a half years we have been doing this. Here we go again. Does it never end?? I think life at home with two small children may be shaping that reaction! It is more difficult also, in my experience, to do something again, when it is no longer new and interesting. This is particularly so when it is restarting something that I have failed to continue on with as I originally intended.

After a week of that summer heat smell in the air it was time for Tyson to unroll shadecloths around the house. 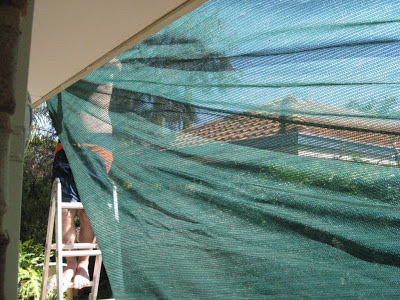 So far we have no new ones this year, but are reinstating all of those from previous years. 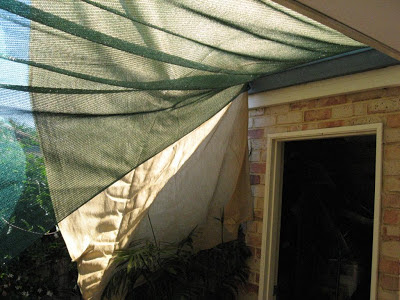 One of those along the driveway remains furled as it broke its moorings in winter storms and needs a more permanent hook attached to the bricks to keep it secure. The shock cord for another had also worn through and the rear courtyard shade is definitely not still using the original ocky straps from six summers ago! Overall, though, the shades and their fastenings are holding up well.

The grey water wheelie bin has been brought back into service. I discovered that I cannot get it over the laundry threshold (or if I do I spill quite a lot in the effort) so Tyson sourced some grey water hose to create an extension out the door ($20 for ten metres). 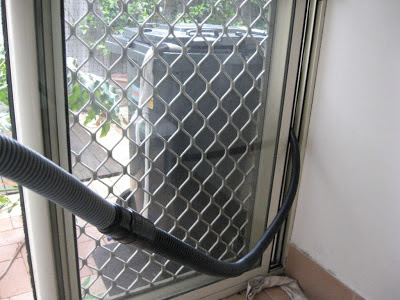 The door obviously doesn't lock like this, but a chock to stop it sliding open any further makes us reasonably confident to leave the washing machine running with its outlet pipe through the back door when we go out.

The original tap connection on the bin had also given us grief last summer, periodically leaking or unwinding itself and falling off, so Tyson purchased a new tank outlet connector (about $8). 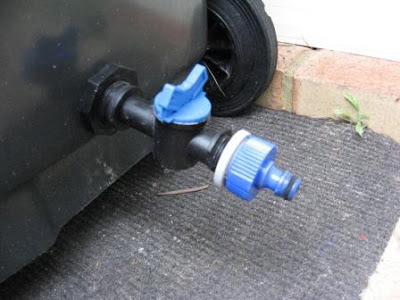 This required sanding the hole for the pipe slightly larger to make it fit, but so far has been a very successful adaptation. The hose we attach to the tap got little holes drilled along it some time last summer to create a drip system for better coverage. 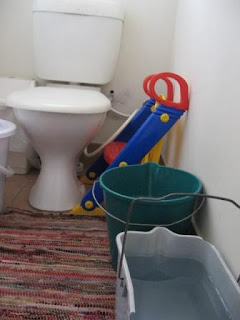 We also put the tubs back into our shower and have grey water on hand again for toilet flushing. This stopped not on account of winter bringing rain, but because somewhere midyear, in late pregnancy, a string of minor ailments over three months had me desperate to change anything that might be contributing and grey water standing uncovered in our bathroom seemed a potential source of winter sniffles. And then we had a baby and I couldn't be bothered with even the small additional effort of gathering and flushing grey water. 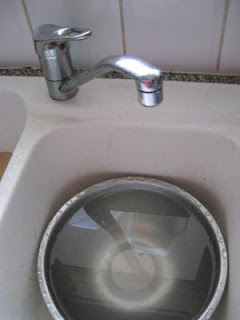 The basin in our kitchen sink comes and goes. We are making another attempt at it this summer. Periodically we get fed up with it not getting emptied outside, or getting too dirty, and it is abandoned. Hence it was definitely one of the actions for me that was a recommit, not a routine, as we approach summer.

Costs and times for these actions are detailed in the links above to where I wrote about them originally. Aside from fifteen minutes here or there for maintenance, recommitting doesn't add more time than the original commitment.

It is much easier, though, to continue with actions that are simply ongoing than to pick up these summer-oriented actions at the end of spring each year. Part of me is tired and thinks oh lets just water with a hose/ flush the toilet/ blast the aircon like everyone else. It was 37 degrees here yesterday (Celsius - that's 100 degrees Fahrenheit, for you in other lands - what some here refer to as 'the old hundred') and the heat made me grumpy. I am home full time with a three year old and a four month old. I get grumpy plenty quick enough all on my own - I don't need any extra grumpifiers! But then... the house kept quite cool most of the day, and when we eventually turned the aircon on (we are not ascetics, after all) I was still grumpy about the heat, so I might as well be sustainable and grumpy. When I look at my reaction, it is being trapped inside that bothers me, and aircon or passive cooling both have that same result. Its grey and raining today... some respite for me to think creatively about ways to get outside as much as possible through summer so I don't get that terrible trapped feeling. Any ideas?

What are you needing to recommit to at present?